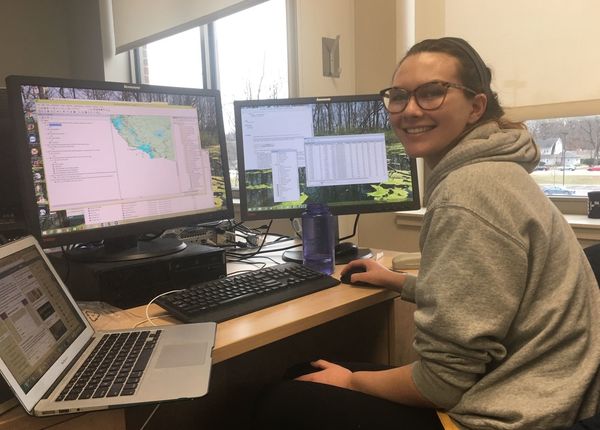 To understand the pivotal role that Big Data plays in the career dreams of a ND-GAIN intern, consider what Carolyn Yvellez wants for her next birthday: a four-terabyte hard drive.

It’s an essential computing tool should you want to store climate data for 278 large U.S. cities.

“I need more storage so that I can work from my laptop in San Diego,” she said. “It takes tons of capacity to map what Honolulu will look like with a six-foot sea level rise.”

Increasingly, it’s this multiplicity of actionable data that will define the future viability of U.S. cities. Especially in terms of a city’s ability to plan for the impact of climate change. Yvellez (‘18, Political Science) has learned this first hand during her 10 months as a data researcher on Notre Dame Global Adaptation Initiative’s Urban Adaptation Assessment (UAA) project.

“Data tells the story of how cities function,” said Yvellez. “More and more, leaders want easy access to data that helps them govern. That’s how we have to work now. People don’t want to read reports, they want to look at pixels on a screen. They want maps and data to show them where climate problems are and where resources are most needed.”

When complete in fall 2018, the UAA will serve every U.S. city with a population above 100,000. The UAA’s online dashboard will allow leaders and citizens to assess how climate change may effect areas such as land use, transportation and water resources. They can see how their city’s services and infrastructure may react to extreme heat, extreme cold, drought, inland flooding and sea level rise. In keeping with Notre Dame’s mission, the UAA metrics pay special attention to social equity. Given their lack of resources, the poor and vulnerable usually suffer most from the impact of extreme climate events.

Yvellez is part of a four-intern team that works under the supervision of Kaitlin Harris, UAA project manager. They track down public, city-level data that will stand behind the UAA’s 39 indicators. Yvellez has special expertise in using Geographic Information Science (GIS). For all 278 cities she creates GIS maps that overlay data on spatial locations. As an example, the map she’s made for Hawaii shows how the rising seas driven by climate change will effect Honolulu.

“From our data, we can determine how much a three or six-foot rise in sea level will inundate a city,” she said. “Then, we can look at the value of the flooded land and estimate what the economic damage will be.”

Work on the UAA has helped Yvellez round out her academic studies with practical experience. Her mentor has been Milan Budhathoki, GIS specialist for the Center for Research Computing and the Environmental Change Initiative. “Notre Dame doesn’t have a GIS master’s program, so it’s been great to learn so much from Milan,” she said.

The UAA isn’t Yvellez’ first such experience, though. She completed a GIS research internship at the University of California-Berkeley, and in South Bend, worked on a GIS data maintenance project for the City’s Department of Innovation and Technology. Her efforts helped verify whether GIS records for EMS services and railroads were accurate. More recently, she’s volunteered to analyze voter registration data for Edward Liptrap, a South Bend candidate who’s running for the District 11 seat in the Indiana Senate.

“Having classroom knowledge will help you get a job,” Yvellez said. “But having hard skills like these really increases the appeal of what I can offer an organization.”

Originally published by Tom Springer at gain.nd.edu on February 22, 2018.