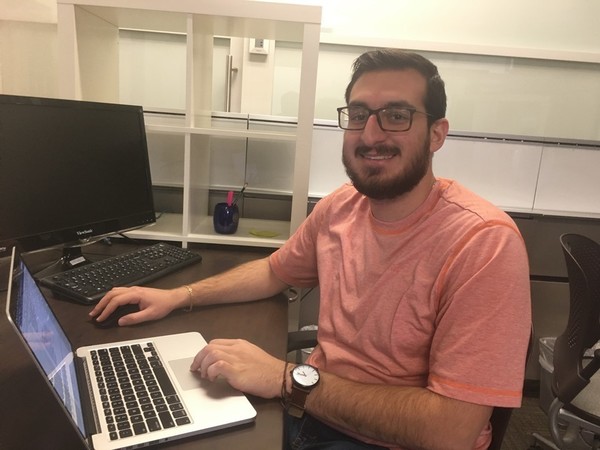 Just because he’s an Environmental Science major doesn’t mean that Jorge Dura likes dirt. Dura worked for a time in a Notre Dame lab where he analyzed soil samples, yet it wasn’t for him.

But ask him to research the emergency traffic capacity for a large city and he’s on it.

“For one of the UAA indicators, we had to know how many cars a city’s road network could handle during a flood,” said Dura (’18 Environmental Science). “I looked for a week, but couldn’t find anything. Then I happened to read a blog that mentioned a web company called Map Box.com. I went to Map Box and found traffic count maps for all the UAA cities. But I wouldn’t have found this data on any public sites.”

It’s this kind of sleuthing that Dura has found enjoyable as an N-GAIN intern. “The world of data is complex, and we try to make it simple,” he says.

When complete in fall 2018, the Urban Adaptation Assessment (UAA), a project of the Notre Dame Global Adaptation Initiative (ND-GAIN) that will provide an interactive online dashboard tool for every U.S. city with a population of more than 100,000 (278 total). With the UAA tool, cities can track the impact of climate change across the hazards of extreme heat, extreme cold, drought, inland flooding and sea level rise. They’ll know not only the risks involved, but their city’s readiness to make use of infrastructure investments that can help them adapt.

The UAA team designed the 39 indicators to help cities determine how their residents and infrastructure may fare during extreme climate events. For example, the indicators for inland flooding include: percent of area with an impervious surface (i.e. asphalt or concrete, which cannot absorb water); percent of population living in flood plains (low areas more prone to floods); and percent of population above age 65 (older residents may need help to evacuate).

Still, even a data sleuth can run into a dead end. As Dura explains, one proposed UAA drought indicator made perfect sense – until they looked for data that would support it.

“We assumed that during a long drought a city’s water rates would increase,” he said. “But the data we found showed no correlation between drought and the fees charged to residents. We’re not sure why. Maybe cities vary a lot on what they spend on chemicals for water treatment. We need more evidence to figure that out.”

After graduation, Dura wants to work in the green business sector, and help companies create sustainable products and services. For that, he already has a family role model. Back home in San Salvador, El Salvador, Dura’s father runs a business that makes products from recycled commercial waste. From plastic scrap, they fashion buckets, trays and carts used by manufacturers. The company also makes plastic toys that they donate to charities.

Whatever his future holds, Dura says the refined web skills he mastered as a UAA intern will prove useful: “As we say in El Salvador, ‘El que busca encuentro’ – he who searches, finds.”

Originally published by Tom Springer at gain.nd.edu on February 27, 2018.