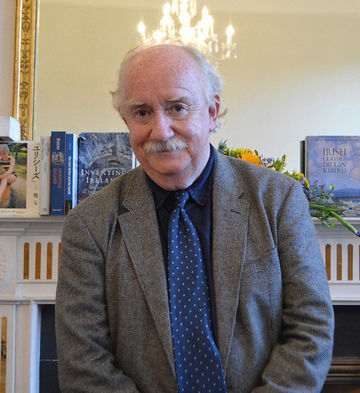 The Dublin Global Gateway honored Declan Kiberd, the Donald and Marilyn Keough Professor of Irish Studies and Professor of English and Irish Language and Literature, for his election to the American Academy of Arts and Sciences (AAAS). The special event was held Thursday, May 9 at the O’Connell House in front of faculty, staff, and students.

“Declan is such a fabulous teacher of our Notre Dame students here in Dublin,” says Whelan. “I know of no one who has more faith in the young, who is so respectful of their opinions, and who is so nurturing of them. Declan is beloved by his former students and they stay remarkably loyal to him.”

Kiberd, a Dublin native, came to Notre Dame in 2011 as a faculty fellow in the Keough-Naughton Institute for Irish Studies. He is an Irish language speaker and scholar of Celtic culture and Irish literature and history. He has taught at the University of Kent, Trinity College, and University College Dublin. 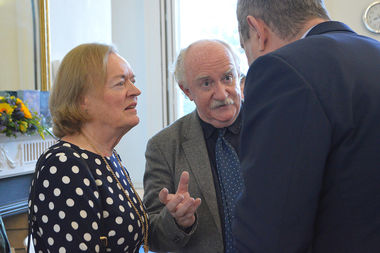 Kiberd is talking with event guests, including Vivian Igoe

“The academic world has changed so much since I first entered it but some things remain constant – not least my admiration for students who – in the face of exhortations to be businesslike and pragmatic – care enough about Irish Literature to study it (as indeed do some of our business and science majors) or in the case of Ph.D. students are willing to devote six years of intense study to the occult writings of W.B. Yeats or the symbolic systems in Nuala Ní Dhomhnaill’s poetry,” says Kiberd.

He went on to say, “A further pleasure of teaching is to see the students whom you have learned from make their way out into the world.”

Learn more about the American Academy of Arts and Sciences announcement.

Originally published by Colleen Wilcox at dublin.nd.edu on May 23, 2019.