The University of Notre Dame Archives and the Hesburgh Libraries have launched a new research portal dedicated to preserving and increasing access to some of the most important works of former University President Rev. Theodore M. Hesburgh, C.S.C., including his work on the U.S. Commission on Civil Rights. The Hesburgh Portal, available at hesburghportal.nd.edu, assembles some of the writings and images from throughout his life and makes the assets digitally available to the public.

“We are pleased that this portal allows scholars, historians and others from across the globe to access Father Hesburgh’s writings and works,” said University President Rev. John I. Jenkins, C.S.C. “We are proud to be able to share his legacy with the world, and we know his life’s work will continue to have an impact on higher education and on all who work for peace and justice.” 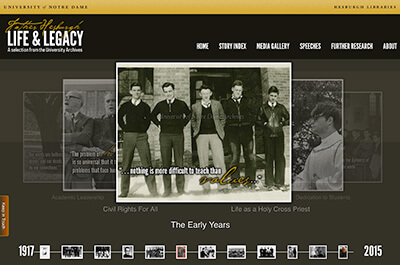 The digital portal was a collaborative project between the University Archives and Hesburgh Libraries with support from the Offices of the President, Mission Engagement and Church Affairs and Information Technologies. The tool is organized around a biographical interactive storyline divided into six chapters that cover his early years, his life as a Holy Cross priest, his dedication to Notre Dame’s students, his work as a Notre Dame administrator, his 35-year tenure as University president and his national work during the civil rights era.

Each chapter includes a biographical overview and a variety of galleries where visitors can engage with photos, documents and files. The portal provides digital access to more than 140 of Father Hesburgh’s transcribed speeches, some of which include his original annotations. It also features more than 30 stories researched and written from archival collections. The site contains audio and video content, oral histories and other documents and items from his collection. 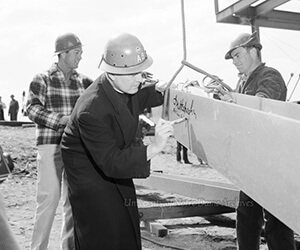 “This project exemplifies ways in which the Hesburgh Libraries and University Archives are emerging as research partners in the digital age,” said Diane Parr Walker, Edward H. Arnold University Librarian. “Our combined expertise ensures that Father Hesburgh’s legacy and research collections are preserved, organized, discoverable and globally accessible to scholars and anyone interested in learning more about Father Ted.

“Attempting to collect and digitize Father Hesburgh’s entire life story would be a daunting task by any standard,” Walker continued. “The Hesburgh Portal is a project that has only just begun, and we envision that it will continue to grow over time.”

Father Hesburgh, who died in February 2015 at age 97, was Notre Dame’s president from 1952 to 1987, a priest of the Congregation of Holy Cross, and one of the nation’s most influential figures in higher education, the Catholic Church, and national and international affairs. He was a charter member of the Civil Rights Commission, created in 1957, and he chaired the commission from 1969 to 1972. 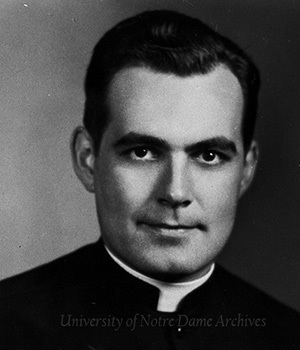 Father Hesburgh was educated at Notre Dame and the Gregorian University in Rome, from which he received a bachelor of philosophy degree in 1939. He was ordained a priest of the Congregation of Holy Cross in June of 1943. Following his ordination, Father Hesburgh continued his study of sacred theology at the Catholic University of America, receiving his doctorate in 1945. He joined the Notre Dame faculty the same year and served as chaplain to World War II veterans on campus in addition to his teaching duties. He was appointed executive vice president 1949, and at the age of 35 in June 1952, he was named the 15th president of Notre Dame.

The two major University changes during his time as president were the transference of governance in 1967 from the Congregation of Holy Cross to a two-tiered, mixed board of lay and religious trustees and fellows and the admission of women to the undergraduate program in 1972. 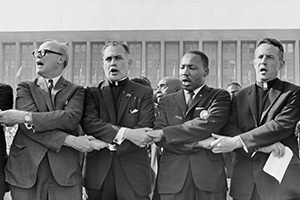 Father Hesburgh played an active and influential role in national and international affairs during and after his presidency. He held 16 presidential appointments over the years, and they involved him in virtually all major social issues — civil rights, peaceful uses of atomic energy, campus unrest, treatment of Vietnam draft evaders, Third World development, immigration reform and many more.

Originally published by Sue Lister at news.nd.edu on January 24, 2018.