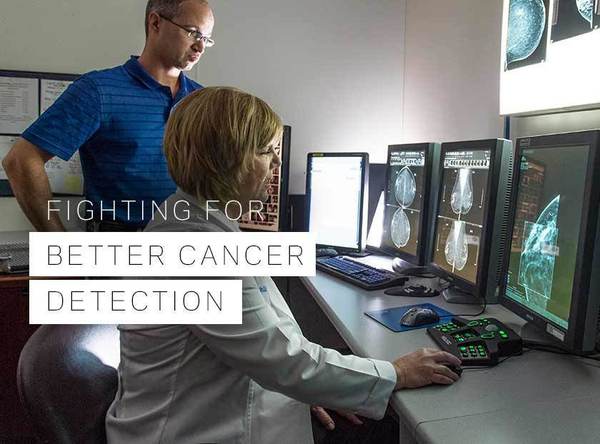 In the United States alone, there are nearly 240,000 breast cancer diagnoses each year, and one in eight women will develop breast cancer at some point in her lifetime. To date, mammograms are the best diagnostic technology for breast cancer. A mammogram’s ability to detect tumors at early stages has made breast cancer one of the most treatable forms of cancer, but there are still almost 50,000 missed diagnoses every year.

For many women, that missed diagnosis comes from having dense breast tissue which prohibits clear results from a basic mammogram. Breasts are made up of three types of tissue: fatty, fibrous and glandular. Most women have a mix of the three, but if the fibrous and glandular tissue outweigh the fatty tissue, women are classified as having dense breasts, wherein lies the problem. Fatty tissue appears transparent on X-rays which makes abnormalities like microcalcifications and tumors easy to see. However, fibrous and glandular tissue are less transparent which makes it difficult to detect abnormalities in a mammogram.

As a double whammy, having dense breast tissue doesn’t only make cancer more difficult to diagnose, it’s also linked to an increased risk of getting breast cancer in the first place.

That’s where Notre Dame engineering professor Ryan K. Roeder comes in. Roeder has devised a way in which gold nanoparticles can be injected into the breast and attach to indicators of cancer, like microcalcifications. Because gold is a heavy metal, in an X-ray or mammogram it will be seen clearly, even in dense tissue.