Nearly ten years ago, the largest recorded tundra fire in the Arctic, known as the Anaktuvuk River fire, was sparked by a lightning strike, burning its way across more than 400 square miles of the North Scope of Alaska. The fire released nearly as much carbon – a greenhouse gas – as the tundra had managed to store in the past 50 years.

Notre Dame Ecologist Adrian Rocha, assistant professor in the department of biological sciences and affiliated faculty member in the Environmental Change Initiative, has recently been awarded a National Science Foundation (NSF) Long Term Research in Environmental Biology (LTREB) grant for $400,000 to conduct a five-year study regarding the ecosystem recovery of the fire scar that was left behind.

“The North Slope is seeing an increase in wildfires in places where they were previously unheard of or rare,” said Rocha. “These fires create a dangerous cycle, so it’s important to understand the different ways the ecosystem is going to react and how that information can be applied in the future.”

When a wildfire burns on the Arctic tundra it kills vegetation and removes carbon from the line surface, releasing it into the atmosphere. In turn, the carbon sustains global warming levels and leads to a higher likelihood of future fires. Based on previous research, Rocha and his team have developed models predicting that tundra fires will double by 2100. However, fires are not the only way carbon gets released into the atmosphere in the tundra.

“Tundra fires do interesting things that don’t happen anywhere else,” said Rocha. “In the Arctic, the organic layer protects a thick subsurface layer--- of soil that remains frozen throughout the year. When there is a fire and that organic layer is removed, the farther along and faster thawing is in the warmer months, increasing the amount of carbon that is released into the atmosphere.” 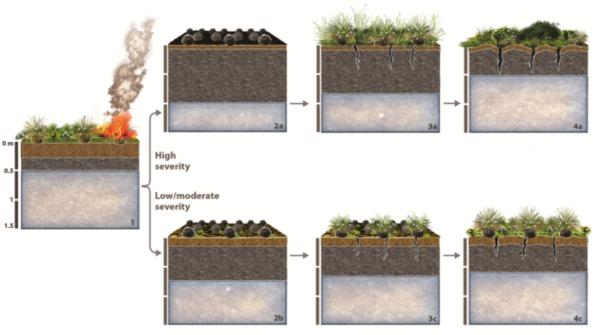 This heightened rate of thawing also allows for more microbes in the soil, which release nitrogen and phosphorous. The focus of Rocha’s research is how species composition and nitrogen and phosphorous cycles feed into carbon cycles within the Anaktuvuk River fire scar’s ecosystem. The research team will look at severely, moderately, and unburned sites, which all have different internal temperatures due to varying amounts of vegetation and exposure of the soil.

“I analyzed more mature fire scar sites on the North Scope of Alaska during my postdoctoral fellowship beginning in 2008 and, at that point, it was too early to conduct a useful comparison between those and the Anaktuvuk River fire scar,” said Rocha. “Now, my team and I can apply that research and hypothesize how the ecosystem has transformed.”

Rocha’s team will use the LTREB grant to understand the long-term ecosystem processes that can be challenging to completely understand given a typical, shorter grant cycle by gathering measurements over an extended period of time and creating an experimental research design. The LTREB Program is intended to support decade-long research projects in five-year cycles that address important questions in evolutionary biology, ecology, and ecosystem science.

Rocha’s research aligns with the Environmental Change Initiative’s (ECI) work to tackle the interrelated problems of invasive species, land use, and climate change. Additionally, ECI provides new intellectual capital and infrastructure at Notre Dame for interdisciplinary teams of faculty who are spearheading innovative research programs in order to help solve complex environmental problems identified as “Grand Challenges” by the National Academy of Sciences. If you would like to learn about other Environmental Change Initiative-affiliated research, please visit environmentalchange.nd.edu.