Nearly 50 seniors were honored on Friday, May 17, 2019, at the annual Dean’s Awards luncheon held in the Jordan Hall of Science Galleria. Mary Galvin, William K. Warren Foundation Dean of the College of Science, presented the awards—including two Dean’s Awards—in front of  a crowd of more than 200 family, friends and faculty who gathered to celebrate.

The Dean’s Award is presented to the top students in the college who have not only achieved excellent academic performance, but also have exemplary personal character, high leadership qualities, and significant service achievements. The 2019 recipients are Sofia Carozza and Arwa Mohammad. 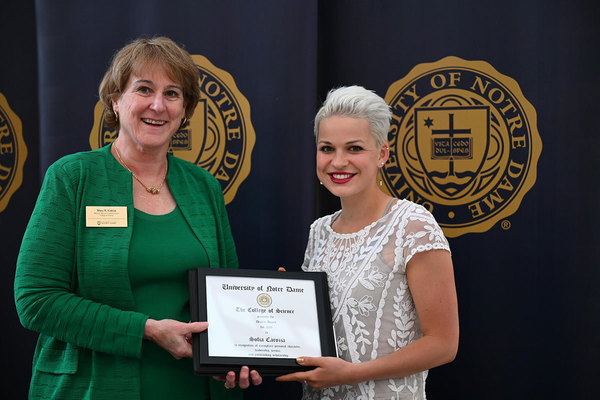 Carozza was named the University’s valedictorian for 2019, and majored in neuroscience and behavior with a supplemental major in theology and a minor in politics, philosophy, and economics. She was a research assistant in the Development and Psychopathology Lab as well as in the Institute for Advanced Study. She has been active as a mental health coach with MindRight, a group that provides socio-emotional therapy services to students who have experienced trauma, and has held various positions in ND Students for Worker Justice, which leads campus social justice initiatives. She is also the leader and co-founder of an exercise program at the Juvenile Justice Center. Additionally, Carozza is a Hesburgh-Yusko Scholar and a Glynn Family Honors Scholar. As the recipient of the 2019 British Marshall Scholarship, her future plans include pursuing a master of philosophy in basic and translational neuroscience leading into a doctorate in psychiatry at the University of Cambridge. 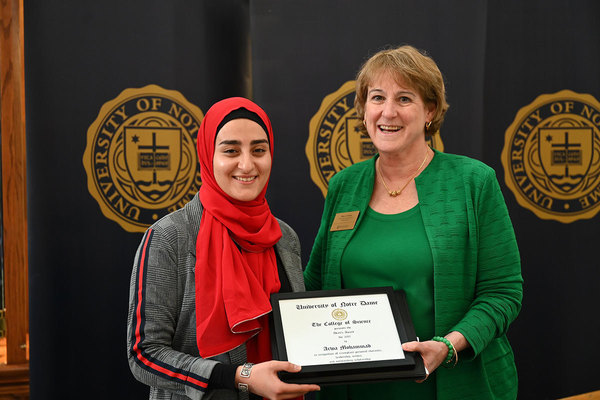 Mohammad majored in science preprofessional studies and in Mediterranean and Middle Eastern studies. She served as a member of the Muslim Student Association during each of her four years, and has been active in her dorm, Badin Hall, as a welcome weekend ambassador and, this year, as vice president. She also worked as a resident assistant. She volunteered both in medical and artistic settings, helping the elderly at a healthy aging clinic in Florida, and also volunteering at a refugee camp in Bethlehem, West Bank. She conducted undergraduate research in several labs, was an Emil T. Hofman Scholar, and recipient of the James DiNardo Award. 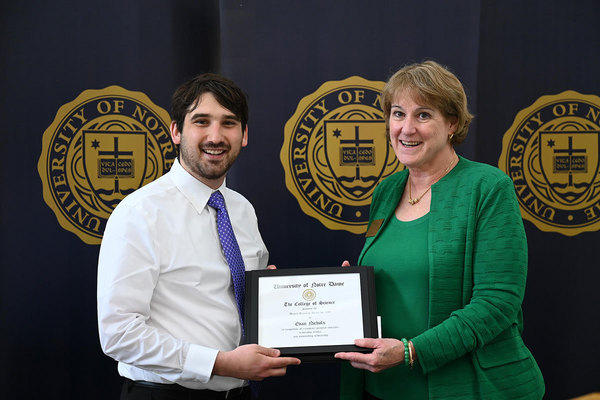 Evan Nichols earned the 2019 Dean’s Research Award. This award is presented each year to the outstanding graduating senior in the College of Science who conducted exceptional research and who embraces, facilitates, and fosters an environment of scientific inquiry. Evan majored in neuroscience and behavior with a minor in constitutional studies. He has published neuroscience research as a first author in three different publications, with two more on the way — one under review, and another in revisions. Nichols has presented his research at four different meetings attended by top scientists in the field, and earned an outstanding oral presentation award at the Notre Dame Summer Research Symposium. In addition to his research accolades, he received an honorable mention for a Goldwater Scholarship, and has worked as a tutor and teaching assistant. This year he was also the resident assistant for Sorin Hall. Nichols plans to pursue graduate studies in neuroscience.

In addition to the Dean’s Awards, each department within the college presented awards to graduating seniors.

Brian Baker, Ph.D., Rev. John A. Zahm, C.S.C. Professor and chair of the Department of Chemistry and Biochemistry, presented the following awards:

Paul Chagnon Award for Service To The Department: Zachary Huber

Originally published by Deanna Csomo McCool at science.nd.edu on May 23, 2019.