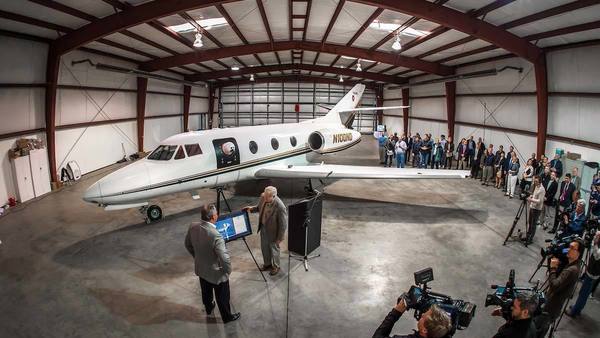 At an airfield in Grand Rapids, Michigan, two Falcon 10 aircraft serve a special purpose to a team of engineers at the University of Notre Dame. Stripped of the amenities one might expect from a private jet, each plane travels at the subsonic speed of 0.8 Mach — approximately 614 miles per hour, a high-speed mobile laboratory for Notre Dame’s Aero-Optics Group. These laboratory aircraft are flown and maintained by Northern Jet Management and have been for the past 10 years.

“Communication requires maintaining intensity of a high-energy laser beam between targets. When you’re flying through the air, the atmosphere corrupts that beam, breaking up the signal,” said Eric Jumper, director of the Aero-Optics Group and the Roth-Gibson Professor in the Department of Aerospace and Mechanical Engineering at Notre Dame. “That’s one of the problems we’re trying to solve. Our program is unique in that there are no other universities with this kind of capability to conduct this kind of in-flight research — with both military and commercial applications — in mid-air. The aircraft allow us to test laser propagation in the ‘real’ environment.” This increases the technology readiness level to a point that companies can start to bid on and produce systems with this technology that will solve real-world problems.

Since the AAOL was established in 2007, Jumper and his team have conducted research for the Department of Defense, the United States Air Force and the Navy. Notre Dame started working with Northern Jet Management in Grand Rapids in 2009, when it was conducting its research on two Cessna Citation aircraft. The group replaced those older and slower planes with the Falcon 10s in 2012 when it received its second five-year grant from the Joint Directed Energy Transition Office within the Department of Defense.

Each jet is equipped with unique turret and door configurations to support testing of high-energy laser beams. The maintenance team and a flight crew at Northern Jet Management operate the aircraft. The “experimental” aircraft are complex to maintain and the flight operations require especially skilled pilots; Northern Jet Management provides both the maintenance professional and the pilots to get the job done. The team logs an average of 100 hours flight time per year.

Jumper’s team is currently studying how to achieve focused communications through high-energy lasers, which Jumper said would be nearly impossible to intercept. Radio waves can be dialed in and directed using a specific channel or frequency but remain vulnerable to being intercepted or jammed. Using laser-focused communications would allow for direct communication with the receiver. Such a system could also have an impact on disaster communications.

Improving bandwidth is another area of focus for the team.

“Right now, you can get on the internet while flying on an airliner, but it’s not the greatest connection, and streaming isn’t possible. Laser communications from ground stations to jetliners would mean providing enough bandwidth for everyone to stream their own videos,” Jumper said. “That’s a significant commercial application to the research we’re able to conduct on these planes.”

To help accomplish this, the Aero-Optics Group and Northern Jet Management have flown two major turret configurations on the Falcon 10s. They have also tested different external configurations of “fences” and “ducting” and internal electronic and optical fixes commonly labeled as adaptive optics. Each configuration requires approval from the Federal Aviation Administration and extensive work by maintenance personnel and flight crews. By working together for the past 10 years, Notre Dame and Northern Jet Management have been able to test different ways to improve tracking and imaging in order to keep a laser beam on target so communications can remain constant and military aircraft can be protected.

Originally published by Jessica Sieff at news.nd.edu on October 22, 2019.