University of Notre Dame astrophysicist Justin R. Crepp and researchers from NASA working with the Kepler space mission have detected an Earth-like planet orbiting the habitable zone of a cool star. The planet, which was found using the Kepler Space Telescope, has been identified as Kepler-186f and is 1.11 times the radius of the Earth. Their research, titled “An Earth-sized Planet in the Habitable Zone of a Cool Star,” will be published in the journal Science on Thursday (April 17). 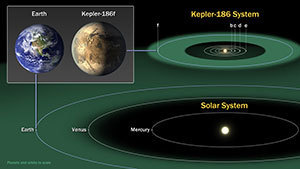 Kepler-186f is part of a multiplanet system around the star Kepler 186, which has five planets, one of which is in the center of the habitable zone — the region around a star within which a planet can sustain liquid water on its surface. While there have been other discoveries of Earth-sized and smaller planets, those planets have been found in orbits that are too close to their host stars for water to exist in liquid form. Findings taken from three years of data show that the intensity and spectrum of radiation from Kepler-186f indicate that the planet could have an Earth-like atmosphere and water at its surface that is likely to be in liquid form.

“The host star, Kepler 186, is an M1-type dwarf star, which means it will burn hydrogen forever, so there is ample opportunity to develop life around this particular star. And because it has just the right orbital period, water may exist in a liquid phase on this planet,” said Crepp, who is the Frank M. Freimann Assistant Professor of Physics in the College of Science .

Crepp is building an instrument at Notre Dame named the iLocater that will be the first ultra-precise Doppler spectrometer to be fiber-fed and operated behind an adaptive optics system. His instrument, to be installed at the Large Binocular Telescope in Arizona, will identify terrestrial planets orbiting in the habitable zone of nearby M-dwarf stars, much closer to the Sun than Kepler-186, by achieving unprecedented radial velocity precision at near-infrared wavelengths. He and his research collaborators will also probe nearby terrestrial planets to determine what their atmospheres are made of.

“Professor Justin Crepp’s outstanding exoplanet research is helping us comprehend our complex universe and in particular those planets that are in the habitable zone. This much-anticipated discovery is shedding new light on planetary systems and their composition,” said Greg Crawford , dean of the College of Science at the University of Notre Dame.

Crepp is one of only 11 Kepler Participating Scientists in the country. He and his colleagues are advancing the goals of the Kepler Mission by seeking to find terrestrial planets comparable in size to Earth, especially those in the habitable zone of their stars where liquid water exists and where life may be sustained.