Music has the power to inspire, to sustain, and to build community. And students and alumni of Sacred Music at Notre Dame’s Calvin M. Bower Doctor of Musical Arts program are playing a vital role in re-energizing the church and the academy through sacred music.

“Music is the glue that binds people’s worship experience — and their community — together,” said Margot Fassler, director of Sacred Music at Notre Dame (SMND). “The doctoral program forms a special kind of leadership that is critical to the future of the Roman Catholic church and other churches in the U.S. Every one of our students is a community leader and it’s a gift we particularly try to nurture.” 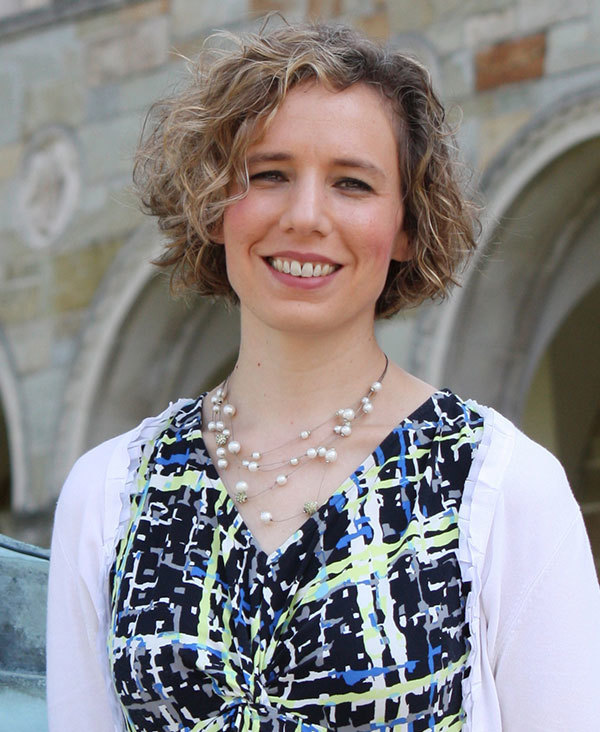 With tracks in choral conducting and organ, the program offers an academically rigorous curriculum with a wide range of opportunities for performance, academic, and community engagement. And its students are in demand— receiving high-caliber job offers from churches or universities, sometimes even before graduation.

Mary Catherine Levri ’06 received her DMA in organ in 2017 and is now director of music at Mount St. Mary’s Seminary for the Roman Catholic Archdiocese of Cincinnati. She teaches music and singing skills to seminarians, provides music for the many liturgies held there daily, and conducts two choirs.

“The standard of excellence at which my Notre Dame professors required me to perform was the greatest gift they could have given to me,” said Levri, who majored in music as a Notre Dame undergraduate and earned a master’s of sacred music in 2011. “It is a true joy to share the same standard of excellence with my students that Sacred Music at Notre Dame first shared with me. The excitement that comes from making music well is contagious.”

Launched in 2013 with a grant from Lilly Endowment Inc., the DMA program accepts two to three students per year, from a large pool of applicants. The program moved to the beautiful new O’Neill Hall last year and has helped develop one of the finest collections of organs in the United States, including the new Wayne and Diana Murdy Family Organ in the Basilica of the Sacred Heart.

“In an extraordinarily brief period, Notre Dame has established itself as one of the world’s leading programs in sacred music for many faiths and the unquestioned leader in Catholic sacred music,” said Peter Holland, the College of Arts and Letters’ associate dean for the arts. “With superb new facilities in O’Neill Hall, with great organs in locations across campus, and with outstanding vocal, organ, and conducting faculty — not to mention the successes of the Notre Dame Children’s Choirs — the program is a signature achievement of the University, something of which we are immensely proud.”

“In an extraordinarily brief period, Notre Dame has established itself as one of the world’s leading programs in sacred music for many faiths and the unquestioned leader in Catholic sacred music. The program is a signature achievement of the University.”

— Peter Holland, associate dean for the arts, College of Arts and Letters

The latest step forward for the DMA program is a generous gift from James and Molly Perry to endow and rename it in honor of Calvin M. Bower, professor emeritus of musicology at Notre Dame.

Bower’s research focuses largely on the history of medieval chant and music theory, and he is dedicated to preserving and performing pre-17th century vocal music. He founded the music ensemble Schola Antiqua of Chicago in 2000 and served as its director until 2008. He has received several distinguished awards over the course of his career, including the Claude V. Palisca Award from the American Musicological Society for his editing and translation of The Liber Ymnorum of Notker Balbulus: Text and Music.

“We are thrilled to be able to support this outstanding program and to honor our talented friend Calvin Bower,” said James Perry. “Sacred music is central to good Catholic liturgy and we hope our gift to endow the Bower DMA will help Margot attract the very best sacred music students, many of whom will become musicians and musical directors in our Catholic parishes.”

The gift will also fund a newly created SMND academic lecture series. The inaugural Calvin M. Bower Lecture will be given by theologian Jeremy Begbie of Cambridge University and Duke Divinity School on Nov. 14.

“Having the program named after Calvin is particularly satisfying because he is a wonderful scholar, church musician, and performer,” Fassler said. “And we take the academic component of our DMA program very seriously.”

Students in the program complete a doctoral thesis and have the opportunity to complement their sacred music studies with coursework in other areas. The gift will allow the program to expand that academic component, Fassler said, and to strengthen ties between SMND and other departments and programs at Notre Dame.

“We have an incredible faculty and a doctoral program curriculum that is flexible so that each student can choose her or his academic courses based on the track that promotes particular career goals,” Fassler said. “They can work more in an analytical field if they’re interested in analysis, in a historic field if they do early music, and in liturgy and theology if they have those particular interests.” 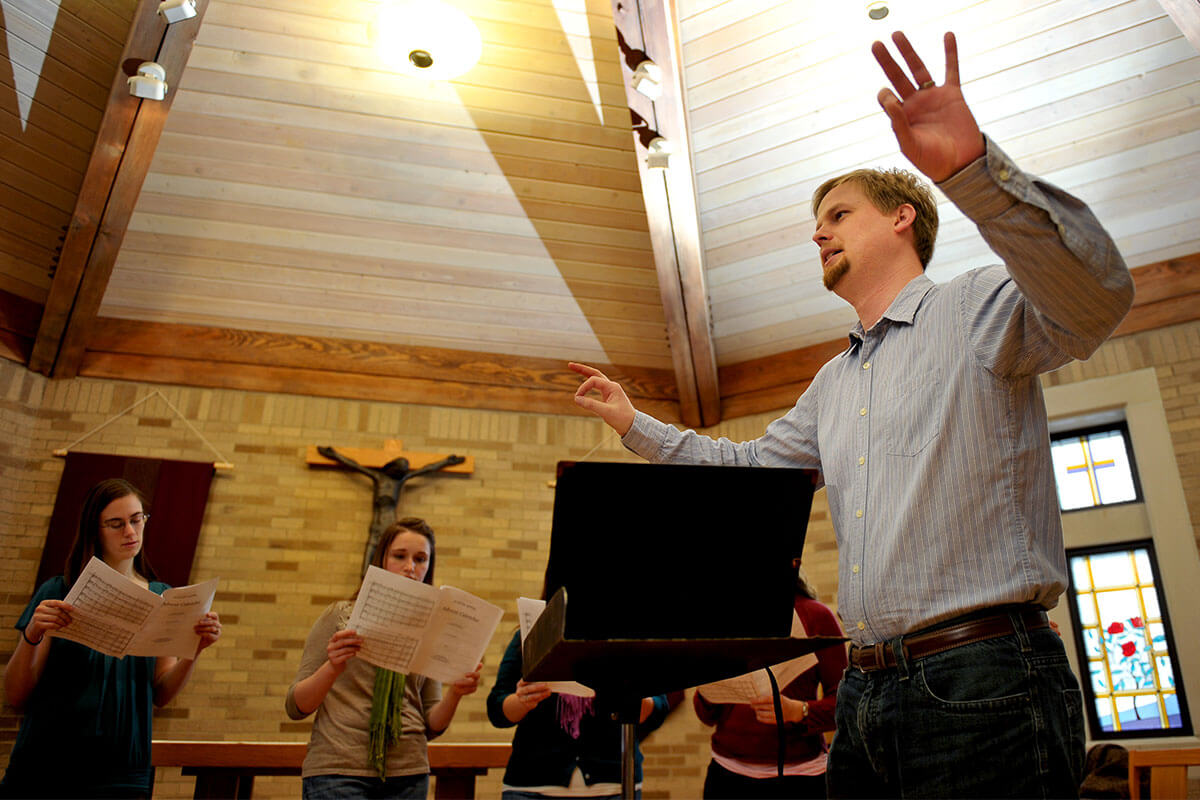 “Notre Dame’s program stands out because it unapologetically emphasizes sacred repertoire, which means that students spend the bulk of their time with the greatest choral works of each musical period,” said 2017 DMA graduate Justin Appel.

For Justin Appel, who received an MSM in 2012 and a DMA in choral conducting in 2017, that meant the chance to explore both historical chant traditions and contemporary choral composers with connections to Eastern orthodoxy.

“Notre Dame’s program stands out, first, because it unapologetically emphasizes sacred repertoire, which means that students spend the bulk of their time with the greatest choral works of each musical period,” Appel said. “Second, the program allows students to pursue a variety of coursework in complementary areas.

“I studied comparative liturgiology, topics in musicology, and Slavonic chant notation in a performance-oriented program. I can’t think of anywhere else you can do that.”

Appel also received funding from SMND to travel to Italy, the United Kingdom, Mexico, and Chile for study and performances, and he conducted research in Latvia, with funding from the Nanovic Institute for European Studies, examining local choral culture for his thesis.

“That trip had significant ramifications on my research and career,” said Appel who is now music director at a large Episcopal church in Tucson, Arizona. “The time I spent in Riga essentially guided my thesis-writing process. The kind of context that comes from experiencing a musical culture that strong and vibrant could not help but make my thesis a sympathetic act of scholarship, since I developed a sense of respect and admiration for Latvian choral music.”

While the DMA program has had significant interest from talented potential students from the beginning, Fassler said, the number and caliber of applicants to the SMND graduate programs has skyrocketed in recent years.

“The kinds of students who have been applying have always been good, but now they’re spectacular,” she said. “We look for students who are highly skilled but also mission-driven. And we’re seeing both.” 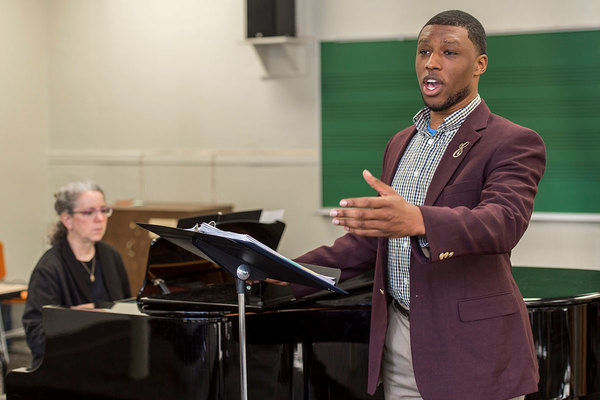 Emorja Roberson completed his MSM in 2017 and will begin the Bower DMA program in January. He plans to enrich his sacred music studies with coursework in the Department of Africana Studies.

One such student is Emorja Roberson, who completed an MSM at Notre Dame in 2017 and will begin the Bower DMA program in conducting in January.

A talented gospel singer, conductor, and gospel pianist, Roberson specializes in African American sacred music and will be enriching his studies with coursework on the history of African American worship and music through the Department of Africana Studies.

“We have so many resources here at Notre Dame,” he said. “We have a lot of exceptional faculty members who are also very open minded about expanding the influence from other traditions and cultures, including Hispanic and African American cultures. And I am excited to see this program flourish.”

After completing his MSM, Roberson began a position as a research assistant to Mark Doerries, a Notre Dame professor of the practice in conducting. Roberson also serves as director of music for Olivet African Methodist Episcopal Church and choir director for the Indiana University South Bend Gospel Choir.

The opportunity for that type of community engagement is a distinctive feature of SMND, he said. Roberson hopes to expand the gospel choir outreach program while pursuing his DMA and continue serving the community after graduation.

“I will continue composing, performing, and conducting, but my long-term goal is to open a school for the performing arts for African American children, for those who might not have the opportunity to get that exposure at a young age,” he said. “To have an opportunity to make a difference through music is such a blessing.”

Originally published by Carrie Gates at al.nd.edu on October 23, 2018.