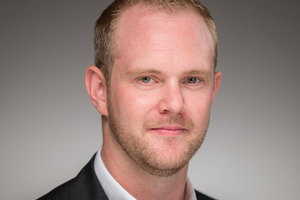 Jonathan Crass, research assistant professor in the University of Notre Dame Department of Physics, has been selected to serve as a member of a NASA and the National Science Foundation (NSF) initiative that will make recommendations to advance the search for earth-like planets that orbit other suns.

The Extreme Precision Radial Velocity (EPRV) Initiative will share the members’ views about the pathway, programs and potential technology development needed. In September 2018, the National Academy of Sciences (NAS) Committee on Exoplanet Science Strategy made recommendations about the next decade’s search for habitable worlds outside our solar system, and urged NASA and NSF to establish this joint initiative to support the science of obtaining ultra-precise radial velocity measurements. These measurements provide essential mass, orbit, and census information about stars.

Researchers have found it challenging to overcome the effects that currently limit existing radial velocity instruments. The “signature” a planet imparts on the light emitted from the star it orbits is often much smaller that other phenomena that affect these types of measurements. Rotation from the host star, its changing surface, the earth’s atmosphere, and instrument instability currently limit scientists’ ability to detect and study these planets. The working group Crass has joined will focus on the pathway to overcome these and make these measurements.

Crass has worked with Justin Crepp, associate professor of physics and director of the Engineering and Design Core Facility, on iLocater, a first-of-it-kind spectrometer that operates at infrared wavelengths and offers improvements over current generation instruments. This is made possible by using small optical fibers and novel technologies. The instrument will be installed at the Large Binocular Telescope, Mount Graham, Arizona, of which Notre Dame is a partner.

The working group, which aims to look at the issue from all angles, began meeting in June 2019 and is expected to finish its report in March 2020.

“The thing that’s really great about this group is there’s a huge pool of the world’s foremost experts in this field. We’re looking at not only what observations we need to make, but also what technology we need to make discoveries happen,” Crass said. “We will all work to overcome technology and instrument challenges, even physical challenges, needed to get the measurements of earth-like plants around stars.”

Crepp was one of 14 members who served on the NAS exoplanet science committee that suggested a joint initiative to advance the science radial velocity measurements.

Originally published by Deanna Csomo McCool at science.nd.edu on August 05, 2019.