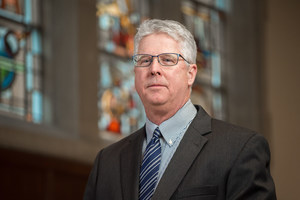 Although working-age adult refugees who enter the United States often initially rely on public assistance programs, a study by researchers at the University of Notre Dame indicates that the long-term economic benefit of admitting refugees outweighs the initial costs.

The study, published as a National Bureau of Economic Research working paper this week, was conducted by William Evans, Keough-Hesburgh Professor of Economics, and Daniel Fitzgerald, undergraduate research assistant at Notre Dame’s Wilson Sheehan Lab for Economic Opportunities, or LEO. The study is a comprehensive assessment of the fiscal costs and benefits of refugee resettlement in the United States.

Using data from the U.S. Census Bureau’s American Community Survey, Evans and Fitzgerald analyzed the costs and benefits of resettling an average refugee who entered the United States between 1990 and 2014.

They estimate the average cost of resettling a refugee in the United States during that timeframe at $15,000, including background checks, housing, English lessons and job training. However, the study indicates that within eight years of their arrival, adult refugees begin paying more in taxes than they receive in benefits.

Moreover, by the time adult refugees have lived in the United States for 20 years, the evidence suggests they will have paid an average of $21,000 more in taxes than in benefits received from all levels of government since arrival.

The study also provided surprising evidence about how well refugees who arrive as children do in the United States. Those who arrived before the age of 15 graduated from high school and entered college at the same rate as their U.S.-born counterparts. However, those who entered the country in their later teen years did not fare as well, which the researchers attribute to language barriers and the fact that many of these children start their lives here in the foster care network.

Originally published by Patrick Gibbons at news.nd.edu on June 14, 2017.