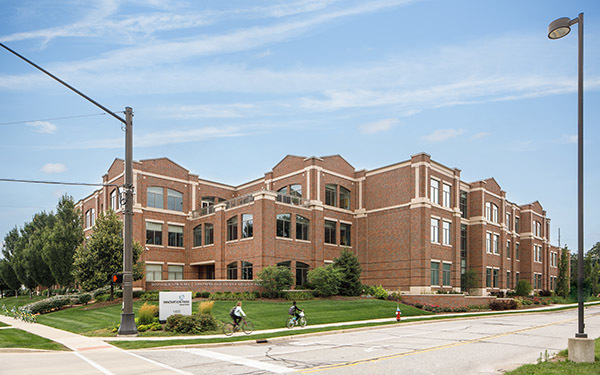 As tradition goes, the IDEA Center hosted an Innovation Rally this past Friday, bringing together students, entrepreneurs, and community members for an afternoon of entrepreneurship. The rallies, which occur on home game weekends, are meant to foster collaboration and showcase Notre Dame and community startups. For the first event of this football season, Cayla Weisberg, a partner and cofounder at InvestHER Ventures, was featured as the keynote speaker. Weisberg, a lifelong entrepreneur, and her partner, Gerri Kahnweiler, founded this innovative venture capital fund to address a general lack of funding for passionate female entrepreneurs. To address this systemic issue, the fund provides women with the capital and guidance needed to successfully grow their businesses.

At the event, attendees were greeted with food, drinks, and a lively crowd. After an hour of networking and socializing, Bryan Ritchie, Associate Provost and Vice President of Innovation at the university, gave a few opening remarks and turned the mic over to Generis. Generis is a company which was founded by two women who had the vision of turning genetic tests into actionable health and wellness plans. After delivering their pitch to the audience, the pair turned the mic back over to Ritchie who introduced Weisberg.

During her talk, Weisberg highlighted the true impact of her mission-driven venture fund while giving insight into the issues she has faced as an entrepreneur who is both young and a woman. She explained that the year InvestHER ventures was founded, women only received 2.19% of venture backed capital. Further, when they engage in conversations with investors, they are often asked more skeptical questions than men, resulting in five times less capital for those who do get investments. To her, this was unacceptable. So, she decided to “change the playbook”. Weisberg and Kahnweiler have found 3 consecutive years of female-founded companies going public. Further, now over 40% of new entrepreneurs in the U.S. are women. On this booming success of her mission, Weisberg commented, “sometimes you just have to create your own table if a seat isn’t available at an existing one.”

During the closing portion of her session, Weisberg shared some advice to aspiring entrepreneurs. She said the key to success is to “hustle, hustle, hustle,” and when someone tells you no, ask “no to what?” In closing, she spoke of the unique opportunities for startups that lie in the Midwest, arguing that there’s a special blend of “grit and tenacity” in the region.