What role does blood clotting play in human diseases? 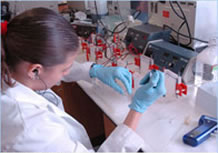 When Francis J. Castellino , the center’s director, came to Notre Dame the identification and function of components of the blood coagulation system, also known as hemostasis, were just being explained.

Now, 40 years later, researchers at the center investigate how the genes involved in blood clotting processes are related to immunity—specifically how they function in inflammatory diseases like sepsis, atherosclerosis and asthma.

To study these complex relationships researchers look at proteins, some of which regulate cell functions. Over the years scientists have identified proteins and how they function, isolated genes that generate these proteins and developed methods for changing genes in mammals.

“It’s a huge system with a lot of components,” says Castellino. “If you think about blood clotting, which is a dynamic process, it’s not just a process where you have clot formation. You also have inhibition of clot formation and clot dissolution. All of these events have to be working synergistically so you don’t have too much or too little clot formation.”

Why the need to alter genes? Abnormal proteins cause the body to malfunction, and altering genes is the process whereby proteins are altered through translation of the altered gene, says Castellino.

It’s a way to find out what genes do, and when researchers know the genetic change that causes a disease like hemophilia, for example, they can model that disease in mice and study its progression.

That’s exactly what the center does to study the blood clotting system: They alter one or two genes at a time to model human inflammatory diseases. They ask questions like whether altering genes that are involved in clot dissolution alter the development and progression of atherosclerosis and test tissues to see what malfunctions occur at various stages of the disease.

Castellino describes the center’s researchers as basic scientists who work in molecular medicine. But their work directly impacts the medical field.

In addition to its work on campus, the center participates in the broader scientific community and will in June 2013 host a biannual conference that will bring leading researchers from around the world to Notre Dame. The conference provides an opportunity for scientists to present their research and exchange ideas.