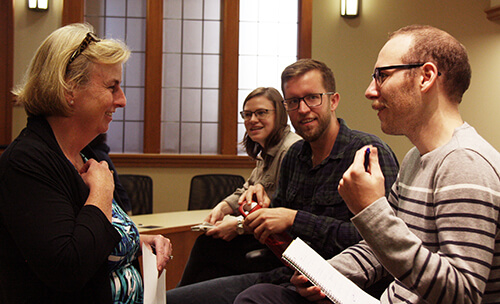 The Klau Center, in cooperation with Notre Dame Law School’s Career Development Office, recently hosted its 2018 Summer Fellows for a briefing on their experiences with public interest organizations. This year’s fellows were Tom Dwyer, Bill Green, and Jessica Skocik. The fellows shared thoughts about the varied benefits of their work as part of the Law School’s Public Interest Month.

Reflecting on his work with the Sargent Shriver Poverty Law Center in Chicago, Dwyer remarked upon the difference not only in the substance of the work that a public interest organization afforded him, but also in the mission that he was called upon to support. Contrasting litigation with legislative advocacy, Dwyer noted that “In law school, politics become a pejorative sometimes, or you’re thought of as less intelligent if you point out a problem with the legal rule….this summer when I saw an inequality, I could write a memo that we should petition the legislature to change this…”

Green’s summer with the Illinois’ Office of the State Appellate Defender confirmed the unique place that interns play in helping assure due process. “When you work for a public interest agency,” he said, “the most important thing – broad-based around anyplace you might work, whether it’s government or non-profit – is that they really need you.” To illustrate the case, he recalled a particularly striking example, as he helped reduce a sentence by discovering a mismatch in identities, a fact that escaped the public defender because of the extraordinary case load. “You’re in initial charging court and you’re seeing them roll through cases, roll through cases, roll through cases…these people don’t get due process, it’s just the nature of the beast.”

Working at the Department of Justice‘s Child Exploitation and Obscenity Section, Skocik realized the need for experienced and dedicated law students to help articulate important legal issues. Skocik noted that FOSTA – the Fighting Online Sex Trafficking Act, signed into law in April 2018 – states that internet sites such as Craig’s List would be subject to prosecution if their platform was used to facilitate human trafficking. The challenge became implementing the law without infringing upon free speech. “How do we speak about this law and articulate to states’ attorneys general and local prosecutors,” she asked, “about how to use this law to correctly prosecute people who are actually trafficking others.” To support her work in human trafficking, Skocik’s fellowship was made possible in part thanks to the generous support of the Pasquale Family Endowment for Excellence.

The Klau Center Summer Fellowship supports work that promotes civil rights and/or the enforcement of federal rights on behalf of underrepresented minorities. This support, as Klau Center Director Jennifer Mason McAward noted, can make a difference in career path beyond a summer experience. “It’s really easy to get onto the conveyor belt that takes you toward the inexorable end of being in a law firm,” she told the gathered students, “but if you have the courage to just step off a little bit, I think that a whole new world of opportunity will open up to you.” Dwyer agreed. Though not the recipient of a paid internship, he was able to accept the position unpaid because of Klau Center support, thus allowing him to work in an environment that challenged his abilities. As Dwyer said, “It let me punch above my weight.”

Originally published by Kevin Fye at klau.nd.edu on October 08, 2018.