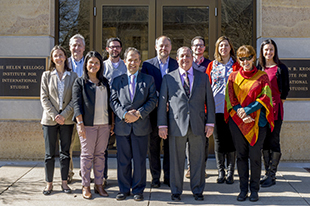 This program addressed the interests of these universities in expanding their academic programs in peacebuilding and development in the wake of the recently signed Colombia peace agreement.

The morning session opened with Sharon Schierling, associate director of the Kellogg Institute, providing an overview of the two-decade history of Kroc and Kellogg’s involvement with civil society and academic actors in Colombia. Notre Dame’s interest in establishing new and vibrant partnerships with Colombian universities was emphasized by Michael E. Pippenger, vice president and associate provost of internationalization in his meeting with the delegation. Ted Beatty, associate dean of the Keough School, shared the Keough School’s focus on integral human development. George A. Lopez, the Hesburgh professor of peace studies, emeritus, and coordinator of the day’s events, discussed the Keough School’s Goal 16 working group that examines the dynamic relationship between peace and development.

Additional sessions included a presentation by Kroc professor Gerard Powers, director of the Catholic Peacebuilding Network (CPN). Powers provided an overview of CPN’s ongoing work in Colombia, as well as with the Catholic bishops conference of Colombia. This was followed by a presentation by the Peace Accords Matrix Barometer team, the Kroc program that has gained recognition in Colombia in light of its monitoring role specified in the peace agreement.

A highlight of the day were the presentations on the importance of community engagement and practical training in peacebuilding by Rebecca Williams and Carolina Serrano Idrovo, Kroc M.A. students who did their externship in Northeast Colombia, July – December 2016.

The visiting delegation agreed to two future interactions this year: the Colombian universities will send a team to the 9th Annual Kroc Summer Institute on ‘Teaching Peace in the 21st Century” in June, and Notre Dame faculty will participate in the Colombian educational Peacebuilding Summit in Bogotá in August.

Originally published by Kristi Flaherty at kroc.conductor.nd.edu on March 13, 2017.