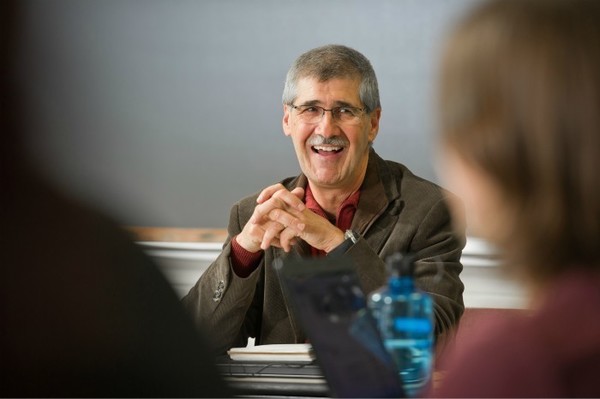 John Paul Lederach has been selected as the recipient of the 36th Niwano Peace Prize. Lederach is professor emeritus of international peacebuilding at the University of Notre Dame’s Kroc Institute for International Peace Studies and a senior fellow at Humanity United. The annual award, presented by the Japan-based Niwano Peace Foundation, honors those devoted to interreligious cooperation in service of world peace.

Lederach was chosen by the Niwano Peace Prize Committee through an annual process that involves soliciting hundreds of nominations from individuals around the world. In their statement announcing Lederach’s award, the selection committee emphasized his role in the development and teaching of peace theory and strategy, as well as his on-the-ground peacebuilding work around the world, including in Colombia, Nepal, Northern Ireland and the Philippines.

“What we hear today is not good news with extremism, organized violence, and authoritarian regimes who are not honoring the rule of law. With this ongoing situation, urgent and important work includes influencing and cultivating a culture of peace among these societies and communities,” said committee member Harsha Kumara Navaratne. “Dr. John Paul [Lederach]’s contribution to conflict transformation through his teaching, training, practicing, and his own organizational network has given tremendous inspiration and courage to peace activists and practitioners around the world.”

Lederach will travel to Tokyo, Japan, to receive the award on May 8 and to give a speech during a formal ceremony attended by select global peace leaders and Japanese dignitaries. As part of the award, Lederach will receive a certificate, a gold medal and 20 million yen (roughly $180,000).

“I am grateful and humbled to receive the 36th Niwano Peace Prize,” wrote Lederach in his acceptance letter. “Your recognition gives me courage that our global beloved family can move beyond hate, division, and exclusion and create the bonds that truly heal.”

Lederach joined the Kroc Institute faculty in 1999. He is widely known for his pioneering work in conflict transformation, and has helped to design and conduct training programs in 25 countries across five continents. He was instrumental in curriculum design for Kroc’s Master’s in International Peace Studies (now part of the Master of Global Affairs program at Notre Dame’s Keough School).

“John Paul embodies the model of the scholar-practitioner that we emphasize here,” said Asher Kaufman, John M. Regan, Jr., director of the Kroc Institute. “Most importantly, his concept of strategic peacebuilding has become the organizing principle for all of our educational programs and activities here at Kroc.”

Lederach also facilitated the development of strong relationships between the Kroc Institute and peacebuilders in Colombia and to promote nonviolent conflict transformation throughout the country. These efforts were documented in a 2007 short film, “Fighting for Peace,” as part of Notre Dame’s “What Would You Fight For?” video series. In August 2013, Lederach was appointed director of Kroc’s Peace Accords Matrix (PAM) project, which would later be tasked with monitoring the implementation of Colombia’s 2016 peace accord under the direction of David Cortright.

Lederach is the author of 22 books, including The Moral Imagination: The Art and Soul of Building Peace (Oxford University Press, 2005) and Building Peace: Sustainable Reconciliation in Divided Societies (USIP, 1997). He is also a Distinguished Scholar at the Center for Justice and Peacebuilding, part of Eastern Mennonite University in Harrisonburg, Virginia.

About the Niwano Peace Prize

The Niwano Peace Foundation established the Niwano Peace Prize in 1983 “to honor and encourage individuals and organizations that have contributed significantly to interreligious cooperation, thereby furthering the cause of world peace, and to make their achievements known as widely as possible.” The Prize is named in honor of Nikkyo Niwano, the founder and first president of the Buddhist organization Rissho Kosei-kai.

Past recipients of the prize include the Adyan Foundation in Lebanon (2018), His Royal Highness Prince El Hassan bin Talal of Jordan (2008), Rabbis for Human Rights in Israel (2006), the Acholi Religious Leaders’ Peace Initiative in Uganda (2004), and Marii K. Hasegawa of the United States (1996).

About the Kroc Institute

The University of Notre Dame’s Kroc Institute for International Peace Studies, part of the Keough School of Global Affairs, is one of the world’s leading centers for the study of the causes of violent conflict and strategies for sustainable peace.