A new research project at the Kroc Institute will examine what it means to be Catholic or Muslim in the modern world. More specifically, the Contending Modernities project—global in scope—will look at the interaction of Catholicism and Islam with each other and with the secular world. 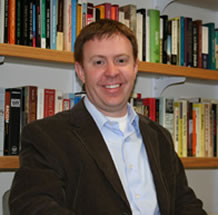 Patrick Mason is the project’s associate research director and notes that there are no universal experiences. “There’s not just one modern world. Depending on where you are or who you are there are different ways that people in the contemporary world express themselves,” he says. “That’s the scholarly heart of the project: what are the multiple ways that people in the world express and understand and experience modernity.”

Catholics and Muslims both wrestle with what it means to be people of faith in a changing world. “We want to get a more nuanced understanding of the religious and the secular and how people understand themselves in the modern world,” says Mason.

Directed by the Kroc Institute’s director, Scott Appleby , the project will officially launch Nov. 18 in New York with a series of events that will preview the kind of work Contending Modernities will do and the issues it will address. For example, a panel discussion open to the public will deal with issues of women and gender in Catholicism, Islam and secularism. The panel will include prominent experts in subjects like Islam, law, theology and women’s studies.

Tackling the issue of women and gender is key because it’s so relevant and timely, says Mason. Case in point: in September France passed a law that bans women from wearing any veil that covers the face—including burqas—in public places.

That’s a clear example of contention between some expressions of Islam and the broader secular world. “In many ways gender is the rub between religious and secular modernity, and we want to understand it,” says Mason. “We anticipate that one of our first research teams will deal with gender issues, and that’s why we’re highlighting it in New York.”

People don’t operate in a vacuum, says Mason, so it’s critical that a study on Catholicism and Islam addresses what it means to be part of secular contexts, too.

The project will include six to seven research groups, each with eight to 10 scholars worldwide, that will each address a specific topic for three years: Human Development and the Globalizing Economy; Science, the Environment, and the Human Person; Gender and Family in State and Society; Authority, Community, and Identity; Law, Governance, and Citizenship; Migration, Mobility, and Displacement; and Violence, Peace, and Human Rights.

The Kroc Institute isn’t the only group studying Islam and Christianity, but its focus on sustained scholarly study is an important distinction. While the findings will eventually have practical application—information that religious and business leaders around the world will use to further their understanding—the project’s first phase emphasizes the research itself.

“In the initial stages it’s not about religious leaders sitting around a table and coming up with common beliefs, “says Mason. “We really want to dig into the traditions and see points of commonality, points of divergence, and include secularism in the debate, too.”

Mason acknowledges that Contending Modernities is an academically and logistically ambitious project: Catholics and Muslims make up 40 percent of the world’s population. The goal is to incorporate other religions in later phases.

“We think Contending Modernities will really be a leader in the field, “says Mason, “and in some ways transform the field of how we think about religion and study it.”