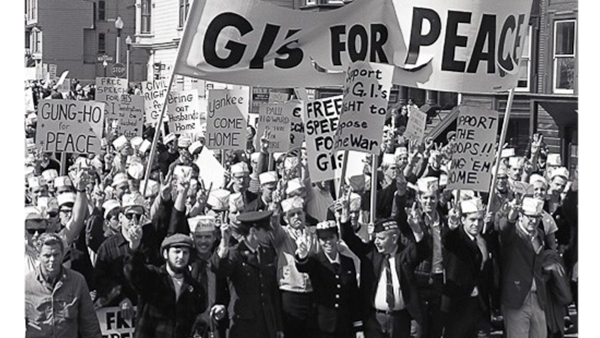 Over 90 veterans, scholars and activists from around the world will gather May 22-24 at the University of Notre Dame for “Voices of Conscience: Antiwar Opposition in the Military.” This is the first major academic conference to explore the impact of military antiwar movements, especially during the Vietnam and Iraq wars, and their importance for peacebuilding. The conference is hosted by Notre Dame’s Kroc Institute for International Peace Studies, an integral part of the Keough School of Global Affairs.

“The historic campaigns we will examine in this conference are linked to the movements of today, especially to the students and community activists organizing against the scourge of gun violence in the U.S., just as we march to prevent war and armed violence abroad,” says David Cortright, Director of Policy Studies at the Kroc Institute and the conference convener. “As one of the premier peace studies centers in the world, it’s important for us at Kroc to understand social movements that have opposed war. During the Vietnam War, the peace movement within the military was less well known, but it had a significant impact on pressuring political leaders to end an unjust war.”

The conference will also host the formal launch of the GI Press Collection, a newly created digital archive of ‘underground’ antiwar newspapers published by and for active duty GIs during the Vietnam War. The collection is housed by the Wisconsin Historical Society.

The conference will also host the U.S. debut of the exhibit, Waging Peace: U.S. Soldiers and Veterans Who Opposed America’s War in Vietnam. Notre Dame will be only the second stop for this exhibit, following its display at the War Remnants Museum in the former South Vietnam capital, Ho Chi Minh City.

Ron Carver, a participant in antiwar GI coffeehouses during the Vietnam War and the curator of the exhibit, began to pull materials together after visiting the War Remnants Museum in Vietnam in 2016 and being approached by then director Ms. Nguyen Knoc Van who was interested in displaying information about opposition to the war within the armed forces. The staff at the War Remnants Museum were instrumental in designing and displaying the exhibit.

“I’ve been involved in the social justice movement for over 50 years, and I was alarmed that most people had no idea about the critical role played by active duty soldiers and veterans in the antiwar movement,” says Carver. “Our goal is that this exhibit and the academic papers coming out of this conference can help to educate more people in the general population about these movements and the role of antiwar soldiers in ending war.”

In addition to the War Remnants Museum and the Kroc Institute, the exhibit was also supported by several other peace institutions, including the Ho Chi Minh City Foundation for Peace and Development and the International Network of Museums for Peace (the War Remnants Museum is an affiliate of this network). The exhibit is free and open to the public. It will be on display in the Hesburgh Center for International Studies through June 15.

Both Cortright and Carver hope that the conference will promote intergenerational exchange, encourage conversation within the U.S. military and inspire a new generation of scholars to study these movements and the strategies for building peace that they employed.

Veterans of the Vietnam and Iraq wars, as well as the ongoing “War on Terror” in the United States are among those who will present during the conference. Among them are Susan Schnall, a navy nurse during the Vietnam War who hired a small plane and dropped 20,000 antiwar flyers over five military bases in San Francisco and Nathan Smith, a former active duty U.S. Army artillery and intelligence officer with deployments to both Afghanistan and Kuwait. In 2016 while serving at command and the plaintiff in the lawsuit Smith v. Obama (now Smith v. Trump) alleging violations of the War Powers Resolution in the war against ISIS.

The full conference schedule is available online. Plenary sessions on May 22 will be live streamed (a link will be posted from this page shortly) and the full lectures will be made available following the conference.