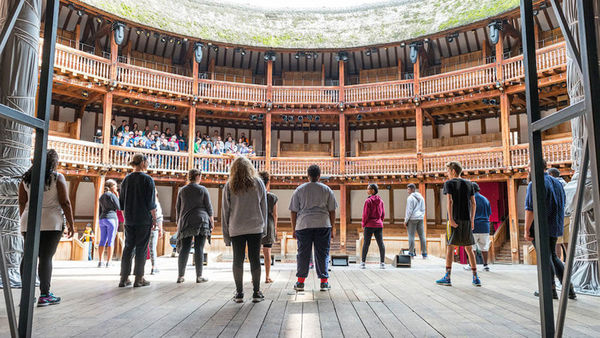 The Robinson Shakespeare Company, a local youth ensemble based out of the University of Notre Dame’s Robinson Community Learning Center, will be the focus of Saturday’s “What Would You Fight For?” segment at halftime of the Notre Dame-Temple football game.

The two-minute segment will highlight the company’s recent trip to England where members ages 12 to 18 performed “Cymbeline” in Stratford and London, took classes at the Shakespeare Birthplace Trust and Globe Theatre and attended four Shakespeare performances.

The troupe was the first ever to perform at the Great Garden at Shakespeare Birthplace Trust’s “New Place,” where the bard’s home once stood, and members led a talk with Globe staff about engaging diverse youth with Shakespeare.

Members prepared for the trip with a series of “boot camps” exploring the differences between the U.S. and England. While there, they stayed in Conway Hall, a University-owned residence hall in central London that houses students in the University’s study abroad program.

The company sought donations to help pay for the trip, which cost approximately $45,000.

The “What Would You Fight For?” segment will air at halftime of the Temple game, which is set for a 3:30 p.m. EDT kickoff on NBC.

Founded in 2008, the Robinson Shakespeare Company offers high-quality theater instruction to a diverse range of South Bend-area students in grades three through 12 and performs outreach to local schools.

The University’s “What Would You Fight For” series showcases the work, scholarly achievements and global impact of Notre Dame faculty, students and alumni and highlights the University’s proud moniker, the Fighting Irish.

Originally published by Erin Blasko at news.nd.edu on September 01, 2017.