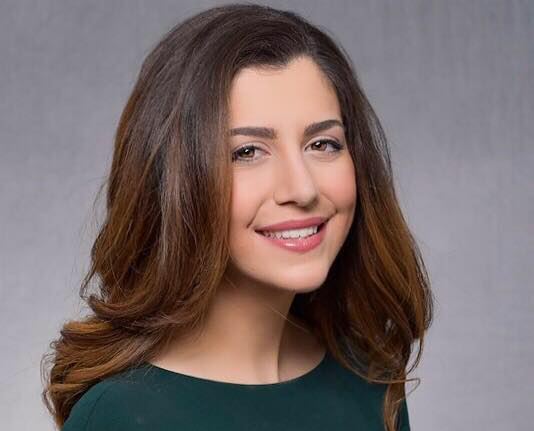 Nicole Sganga ’15 spent the summer of 2013 camped outside St Mary’s Hospital in Paddington London, waiting for Kate Middleton and Prince William to make an appearance with Prince George, the first royal baby in almost 30 years. She was not there waving flags with the royalist crowd. Instead, she was part of a huge media circus reporting for CBS News as part of an internship funded by Notre Dame.

“It was my first real experience working at a network and having this crazy opportunity,“ reflects Sganga. “It was entirely funded by the University of Notre Dame, and I’m immensely grateful for that.”

Sganga, a film, television, and theatre and political science major and journalism minor, recently finished her masters in international human rights law from Oxford University while working as a political reporter for CBS News. She doesn’t have a long time to celebrate, however, as she’s jumping straight into her new role as one of the 2020 presidential campaign reporters.

She counts her time in London, both during her summer internship and her semester abroad, as influential in making her a better reporter and a more empathetic person.

Sganga knew from the beginning of her time at Notre Dame that she was interested in journalism, and her time in London was a confirmation that it was the right career path for her to pursue.

“London is truly the capital of international news," states Sganga. “From that perspective, there was no better place to be.”

Being abroad also helped her to look at American politics differently. Through the eyes of her professors, or even people she met in pubs and on the street, Sganga learned how the rest of the world perceives the U.S. 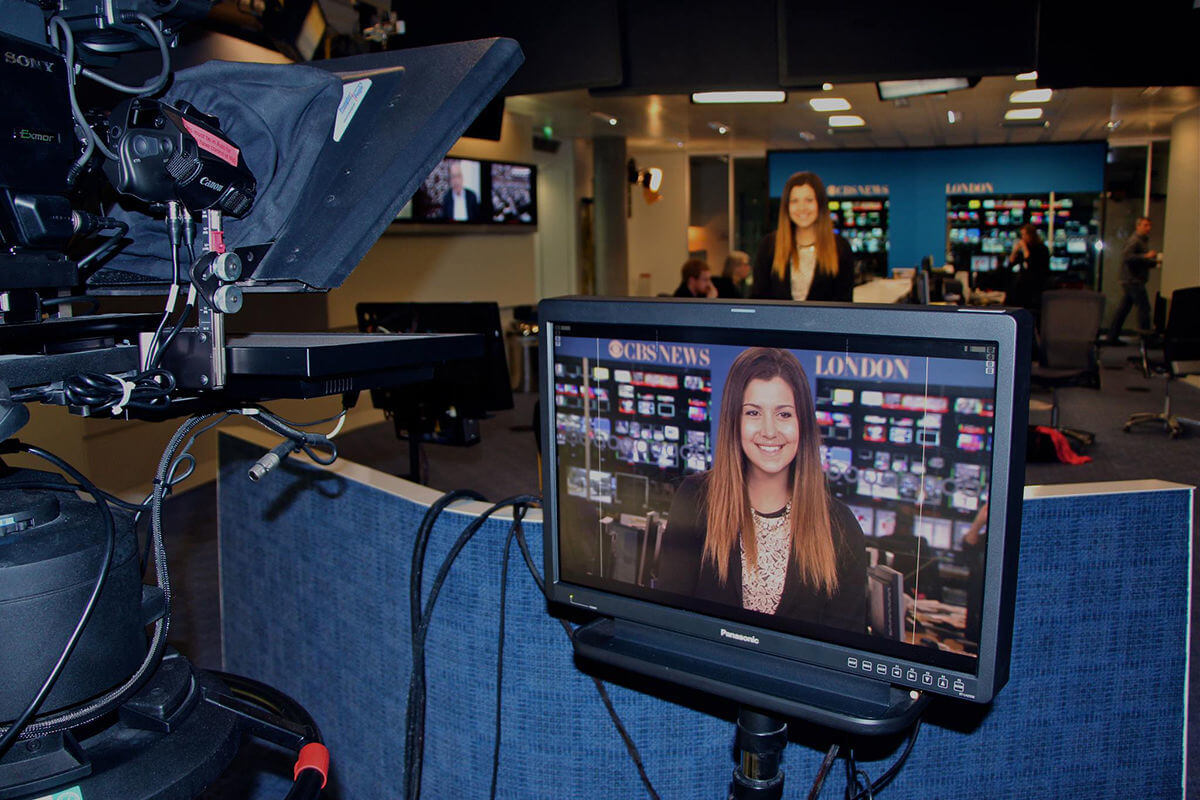 Sganga on set at CBS during her internship

“Living in the UK helped me to view American politics from a bird’s eye perspective,” says Sganga. “You take a step back and reflect on what it means to be an American abroad and that has helped me appreciate our democracy from a wider lens so that when I returned to the U.S., I was more thoughtful in my reporting and my understanding of campaigns.”

Obviously, her experience studying abroad did not center solely on politics and media. Students who spend time in London are not only exposed to British culture, but to an incredibly international scene. Sganga took full advantage of this, throwing herself into trying new things and meeting new people.

“Just being in one of the biggest and brightest international cities in the world was brilliant,” says Sganga. “I was constantly interacting with people from different cultures, walking past different embassies, and trying some of the best Indian food I’ve ever had!”

“Just being in one of the biggest and brightest international cities in the world was brilliant. I was constantly interacting with people from different cultures, walking past different embassies, and trying some of the best Indian food I’ve ever had.”

The study abroad experience allows students to develop their understanding of the world, but also their sense of self. Through immersion in a different culture, their sense of adventure grows, and their confidence along with it. Sganga points to her time in London as a time when she grew as a person and became aware that she can get by in a different country and culture. 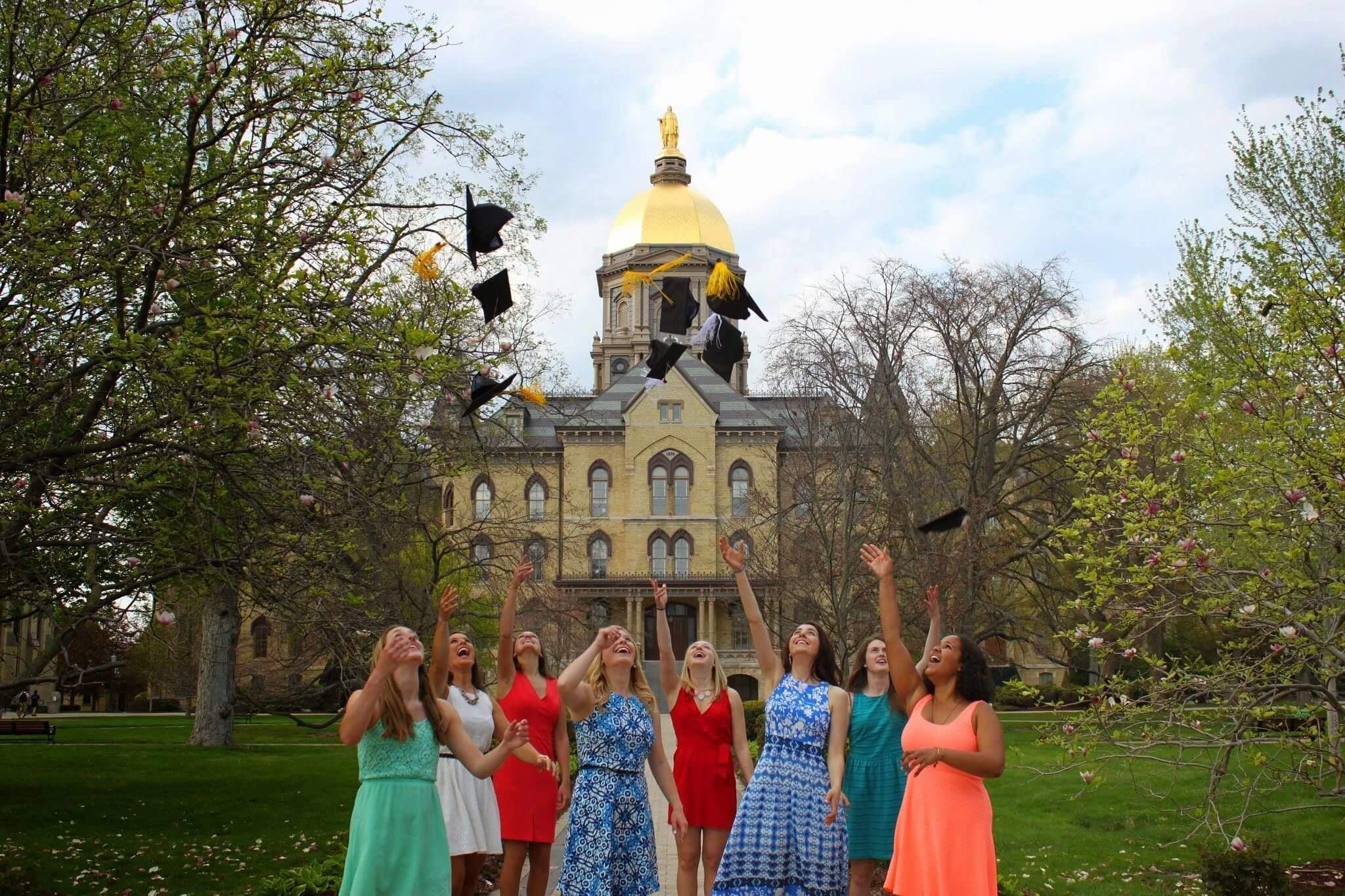 Sganga graduating from the University of Notre Dame

With such a vibrant immigrant population, there are more languages spoken on the streets of London than anywhere else in the world and the cultural richness of the city is beyond question.

What’s more, the city is a stepping stone to the rest of Europe, and students take full advantage of this, spending weekends visiting countries across the continent. Getting used to this sort of traveling was part of Sganga’s experience of London and has helped her immensely in her career.

“I’ve covered everything from Hurricane Maria to the Las Vegas shootings, to the Cosby trial,” reflects Sganga. “You get a call in the middle of the night to fly halfway across the country and you sort of have to pack up and go. My semester in London taught me to be comfortable with that; we traveled so much around Europe!”

It also gave her confidence in her own abilities in a journalist. Before London, she wondered if she was tough enough to stick it out as a reporter. Her internship with CBS threw her straight into a newsroom and forced her to abandon any doubts.

“My time in London was a test,” says Sganga. “I asked myself, could I do this in real life? And I decided I could.”

London as its own classroom

Confidence comes from getting out of your comfort zone, and studying abroad compels students to leave the security of what they know and explore what the world has to offer. This also applies inside the classroom, and course options in London allow students to stretch their imagination. 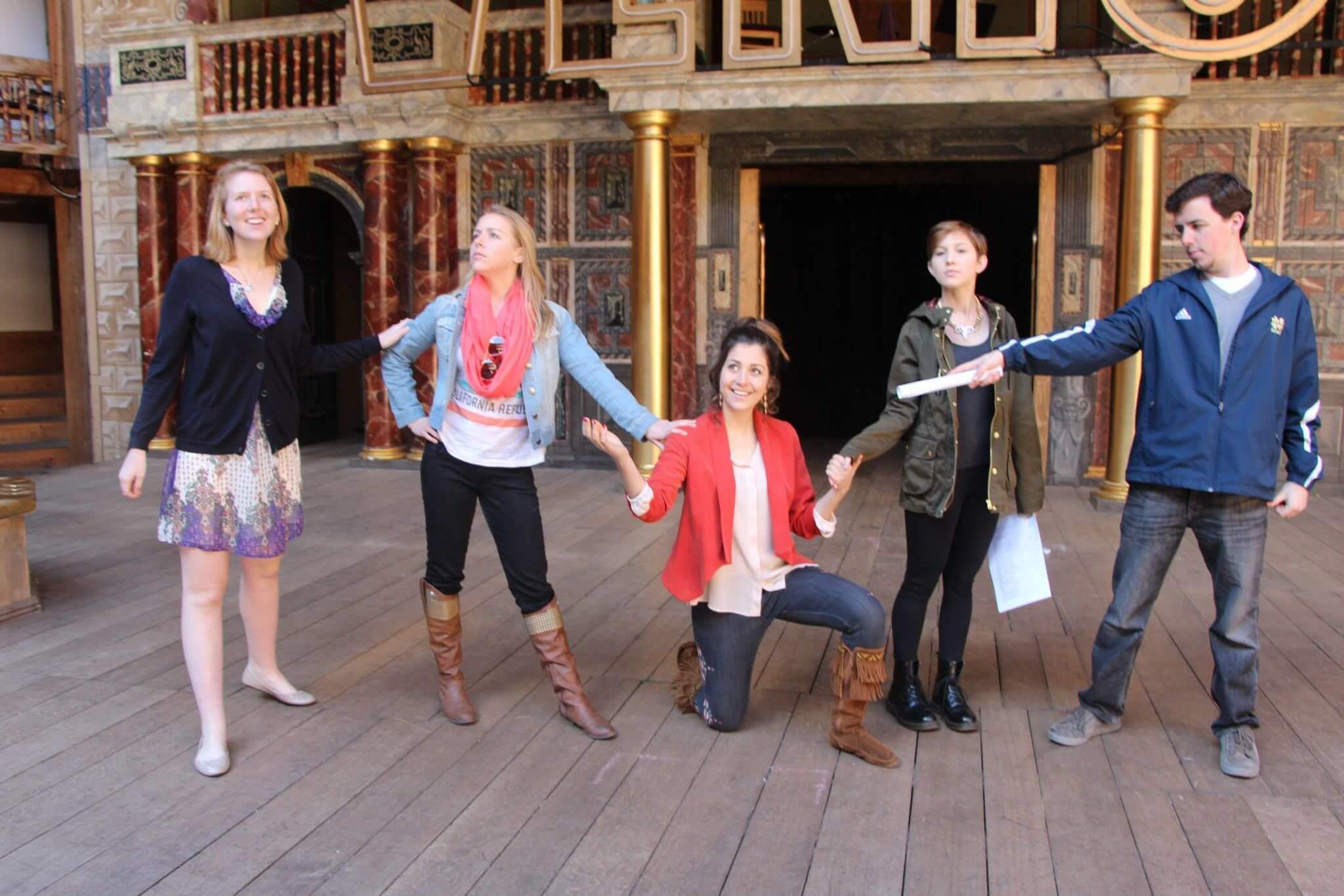 Sganga in class at the Globe Theatre in London

One of the reasons Sganga chose to study in London was this plethora of course options. In the same semester, she was learning about London as a film capital as well as the conflict in Northern Ireland compared to the Palestinian-Israeli conflict. The chance to study subjects so far outside of her usual realm broadened her horizons beyond measure.

“I took a course in gothic literature which I thought I was going to hate, and it was one of the most phenomenal excursions of my college career,” laughs Sganga.

Living in the center of England’s capital city provided limitless options for experiential learning. Sganga visited Shakespeare at the Globe Theatre, took trips to the Victoria and Albert Museum to study Alexander McQueen, and lived next door to two of the UK’s biggest film institutes.

Faculty at Notre Dame's London Global Gateway capitalize on these rich cultural offerings, using the city as its own classroom. They immerse students in the arts, history, and politics that they learn about in class, bringing the teaching to life with trips and guest speakers. As a student in London, Sganga always viewed her coursework through a journalist’s lens, and understanding a subject from a British perspective gave her a greater grasp on the work of an international reporter.

“It expanded my understanding of what a journalist does and gave me an opportunity to try writing new things,” reflects Sganga. “It also helped me understand the world a little bit better, from an international context.” 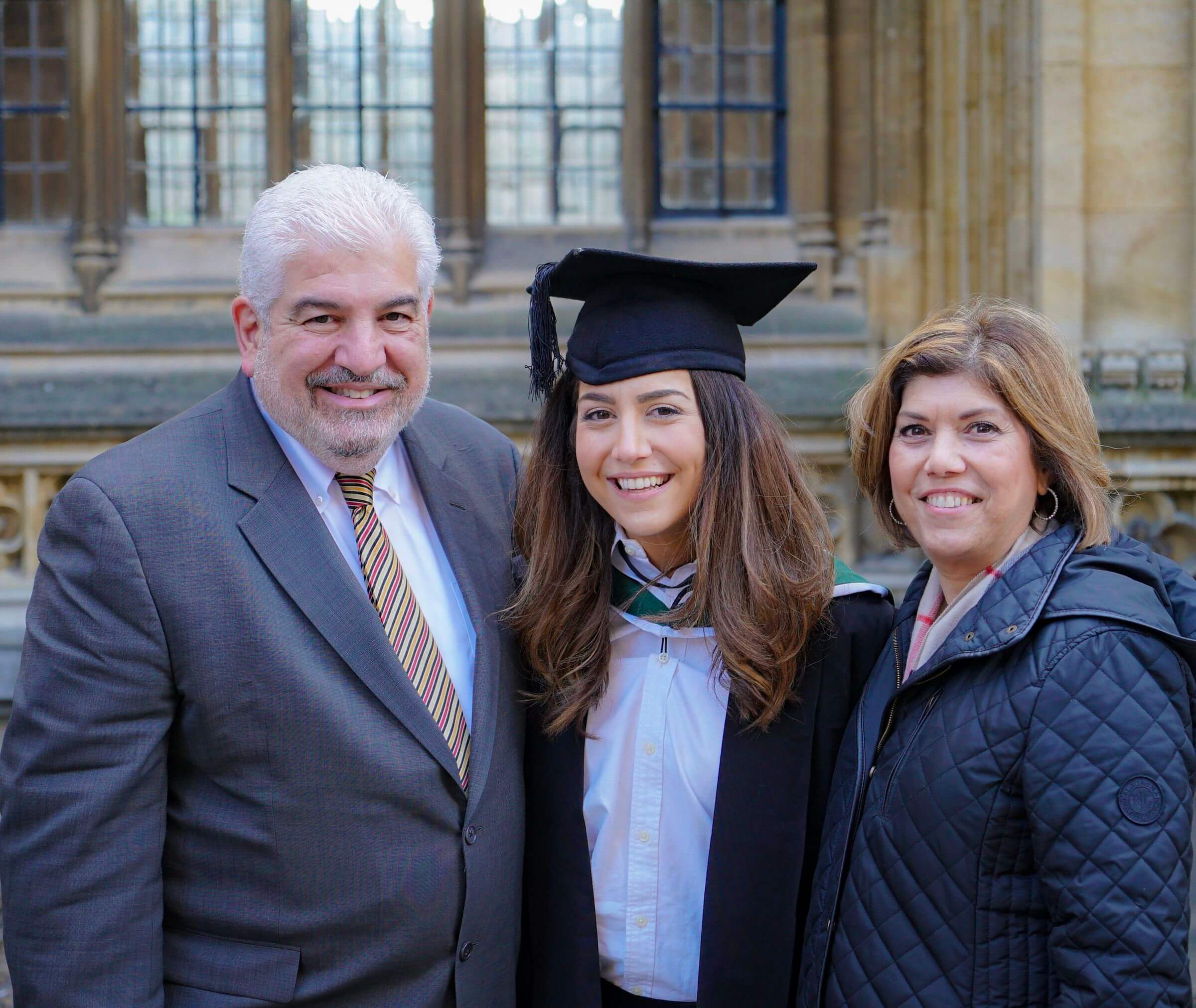 An understanding of the world brings a heightened sense of compassion and Sganga believes the most important thing about studying abroad is that it makes you a more empathetic person. Students are exposed to people from all different backgrounds, countries, and cultures and can learn from this experience in a joyful way.

“You are challenged to connect with the people that you meet in this new place, and you realize that you share this very unique thing that is being human,” says Sganga. “It sounds tacky, but it’s especially important for journalists that we are able to empathize with the people so that we can tell human stories.”

Sganga’s skill in connecting with people is one of the many reasons that she excels as a journalist, and her particular interest in video journalism reflects this.

“When you travel, you appreciate what it’s like to experience a place, and then when you work in video journalism, you try to figure out how can you bring people to the scene with you,” says Sganga.

During her time with CBS News, she went everywhere with a camera and interviewed all sorts of people. It was not only royal coverage, but the G-8 protests, the Arab Spring, the protests in Istanbul, and much more. The footage she shot was often used by CBS, and she spent much of her time absorbed in video, working out how to tell a story through raw footage.

“That’s the primary purpose of video journalism — to bring as many people on the ground of breaking news stories as you can,” says Sganga.

“Journalism has always been and will always be the pursuit of truth. As reporters, we seek and report the truth and that alone is incredibly important to any informed electorate and in turn, any democracy.”

The pursuit of truth

Sganga’s new role as a 2020 presidential campaign reporter widens her scope, allowing her to break news on one of the most attention-grabbing stories in the world. In particularly turbulent political times, Sganga sees the role of the journalist as more vital than ever.

“Journalism has always been and will always be the pursuit of truth,” states Sganga. “As reporters, we seek and report the truth and that alone is incredibly important to any informed electorate and in turn, any democracy.” 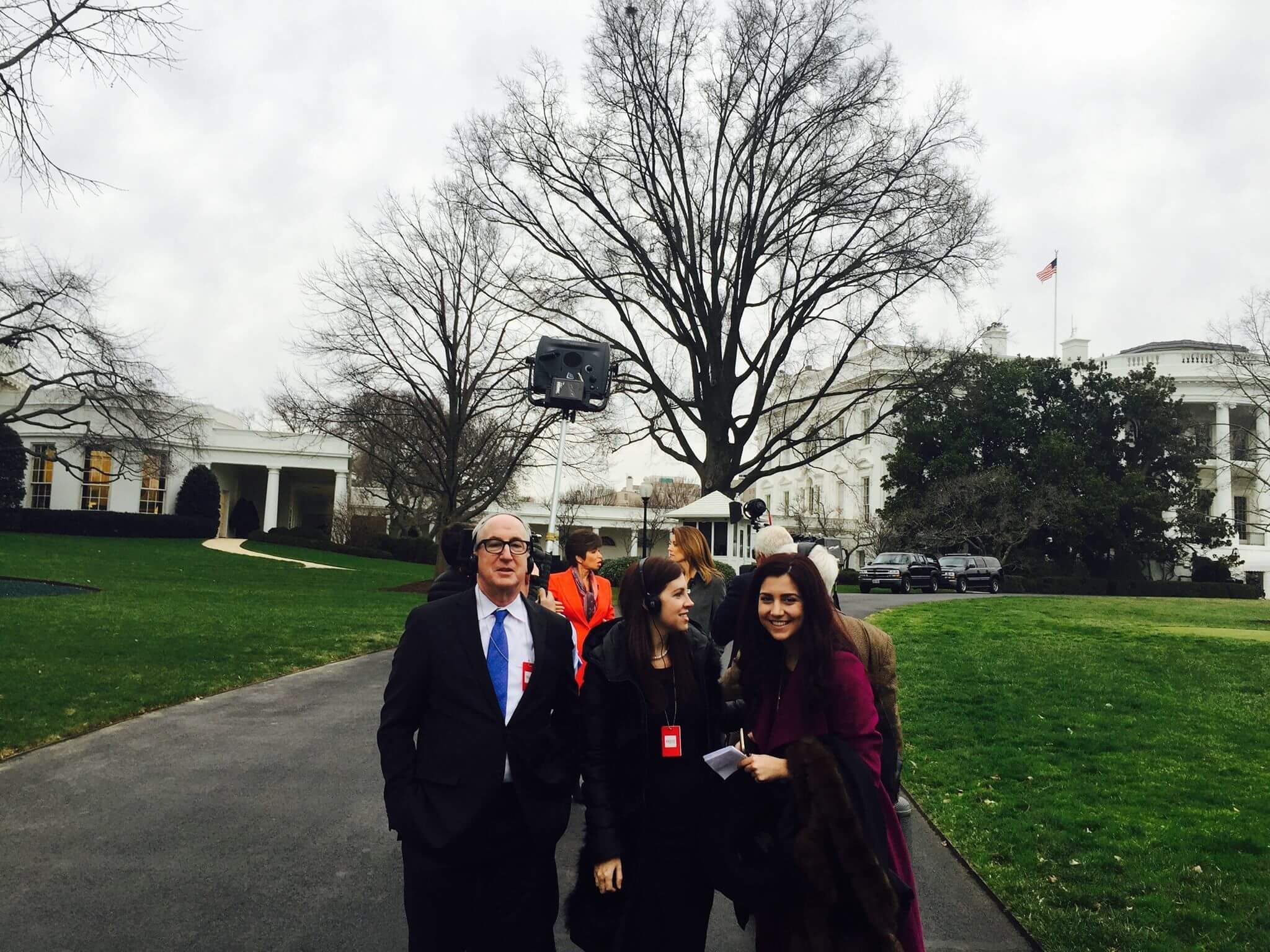 Reporting on the presidential campaign is exciting, and Sganga loves her job. She loves being in new places and meeting new people. She also knows that the media has a significant role to play in telling this story, and it’s not a responsibility she takes lightly.

“Getting to seek the unadulterated truth, getting to the bottom of different candidates competing for the highest office, is a privilege,” states Sganga. “I remind myself of that every single day.”

Sganga’s willingness to jump on a plane at a moment’s notice, or spend days on tour with presidential candidates, is down to her determination to report the facts to the general public. What makes her such a successful international reporter is her ability to connect with people all over the world and to tell human stories. Her time in London allowed her to realize that we all share common ground, giving her the compassion she needed to pursue her dream career.