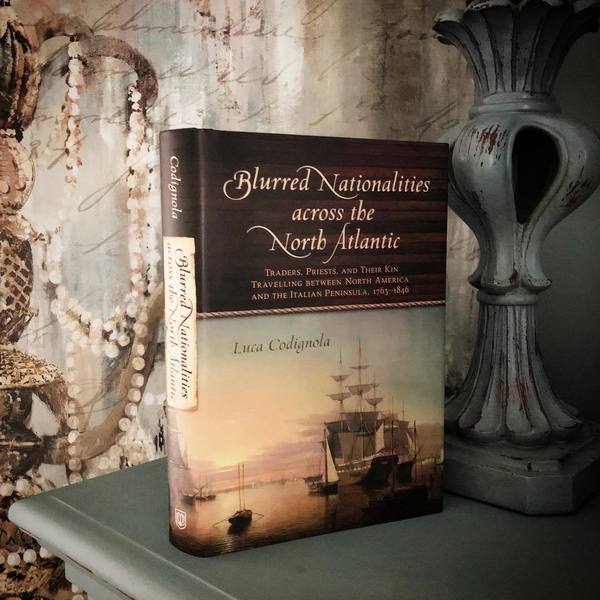 Luca Codignola, senior fellow of the Cushwa Center for the History of American Catholicism at the University of Notre Dame, published his latest book entitled Blurred Nationalities across the North Atlantic: Traders, Priests, and Their Kin Travelling between North America and the Italian Peninsula, 1763-1846 (Toronto, Buffalo, London: University of Toronto Press, 2019).

The book focuses on those thousands of people who were frequently moving between North America, specifically the United States and British North America, and Leghorn, Genoa, Naples, Rome, Sicily, Piedmont, Lombardy, Venice, and Trieste. Predominantly traders, sailors, transient workers, Catholic priests, and seminarians, this group relied on the exchange of goods across the Atlantic to solidify transatlantic relations. This captivating book also lends clear insight into the ways stories about the New World passed among travelers through word of mouth and letter writing. The book also challenges the idea that national origin constitutes the most important feature of a group’s identity, revealing instead the multifaceted personalities of the people involved in these exchanges.

Matteo Sanfilippo, a leading early modern historian, writes that Blurred Nationalities questions simultaneously the history of Italy, Italian migration, Catholicism, and colonial North America." For her part, Donna R. Gabaccia, a pre-eminent migration historian, comments: “in examining the mobility of ideas, trade, and Catholic networks, Blurred Nationalities convincingly reveals the significant impact of merchants, priests, and lay travelers from both North America and Italy.” “This book,” she adds, “is a model of the kind of research any historian might wish to teach advanced students.”

Codignola is also adjunct professor at the Department of History of Saint Mary’s University and Professeur associé of the Département d’histoire of the Université de Montréal. A former professor of North American History at the Università di Genova, he is best known for his work on the Roman Catholic Church in the early-modern North Atlantic area. He has also written on the history of early European expansion in the Atlantic region. Codignola is currently writing a book on the lives of the Roman Catholic missionaries in the distant peripheries of English- and French-speaking North America in the early modern era.

Originally published by Costanza Montanari at rome.nd.edu on April 03, 2019.