Ryan McClarren’s new book, Computational Nuclear Engineering and Radiological Science Using Python, offers a sharp contrast to traditional texts that focus on theory and those that promote the use of legacy programming languages for nuclear engineering and radiological science applications.

An associate professor of aerospace and mechanical engineering at the University of Notre Dame, McClarren uses Python, a modern and easy-to-learn programming language, to teach numerical methods for engineering. He also provides the reader with a toolbox of numerical techniques to handle the breadth of problems engineers often face. 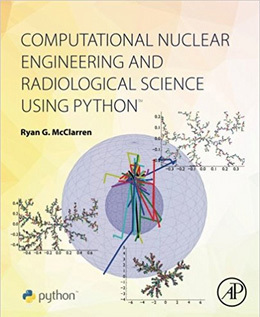 Because he is a strong supporter of educating students in the mathematics and computation necessary for modern engineering, McClarren is no stranger to reaching students of all ages. His new textbook is actually the second book he has published. The first, Radiation and You, introduces young children [ages 6-12] to the many ways in which radiation is used in the world around them — from smoke detectors to medical devices.

A member of the American Nuclear Society and the Society of Industrial and Applied Mathematics, McClarren joined the Notre Dame faculty in August 2017, having previously served in the Department of Nuclear Engineering at Texas A&M University. He was awarded the Texas A&M Engineering Experiment Station Young Faculty Fellow award in 2017.

Prior to his time at Texas A&M, McClarren worked as a postdoctoral researcher and member of the Computational Physics and Methods Group at Los Alamos National Laboratory, where he is still active as a guest scientist.

Originally published by Nina Welding at conductorshare.nd.edu on May 02, 2018.