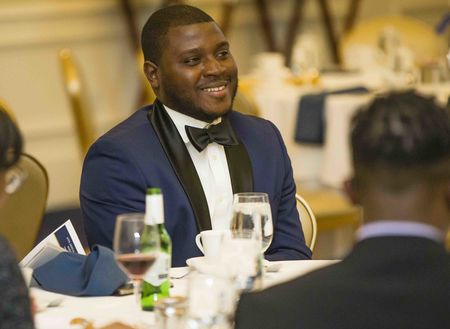 Walter Jean-Jacques, pictured here in April at the annual banquet for the Notre Dame Black Law Students Association, has been named a member of the Equal Justice Works National Advisory Committee.

Equal Justice Works is a nonprofit organization committed to mobilizing the next generation of public interest attorneys. The organization’s National Advisory Committee is a diverse group of eight law students and eight law school professionals who extend the reach of Equal Justice Works initiatives through leadership, feedback, and outreach to help law students transform their passion for public service into a lifelong commitment to equal justice.

“It is such an honor to be a part of a committee of such a prestigious organization, and to help spread the news of its amazing initiatives in shaping the careers of public interest lawyers throughout the country,” Jean-Jacques said. “I was shocked to find out that I was selected, and truly grateful for this amazing opportunity.”

This summer, he is working for the NAACP Legal Defense and Educational Fund in New York City as an Equal Justice America Fellow and National Lawyers Guild-Haywood Burns Fellow.

Jean-Jacques earned his B.A. in African-American studies and political science at Columbia University and M.S. in social policy at the University of Pennsylvania.

“Since I was six years old, I always wanted to go to law school to legally combat the inequities that I saw in my community,” he said. “I chose to attend Notre Dame Law School because I believe my career path embodied what it meant to be a ‘Different Kind of Lawyer.’”

Originally published by Kevin Allen at law.nd.edu on June 25, 2018.