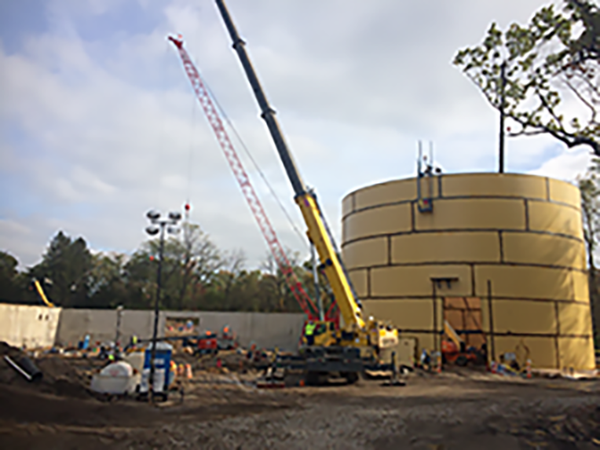 A key component of the University’s Comprehensive Sustainability Strategy includes reducing its carbon dioxide emissions in part through increasing its use of renewable and recoverable energy sources. A new energy plant, located in the small wooded area northeast of campus, will help do that.

The East Plant will house mechanical equipment for the new geothermal well fields located beneath the Ricci Fields; two 2,000-ton electric-driven chillers; and a thermal energy storage tank with the capacity to store 2 million gallons of chilled water.

“This new facility will provide capacity to support campus energy growth using efficient and renewable energy strategies,” says Paul Kempf, senior director of utilities and maintenance. “Supporting the campus’s largest geothermal project to date as well as utilizing efficient electricity produced at the power plant, this facility will provide both chilled water for cooling and hot water for heating,”

At a capacity of 1,350 tons, the East Plant’s five geothermal heat-recovery chillers will provide both heating and cooling. The chilled water produced will be a source for the campus distribution system, while the hot water will be piped to nearby buildings to provide an efficient and greener approach to heating. Dunne, Flaherty and McCourtney halls have all been designed and built to use hot water heating, as will other buildings yet to be built in that area of campus.

Rather than having more chillers working during the peak daytime hours, a thermal energy storage tank will be used by the two chillers in the East Plant to produce and store chilled water during off-peak hours when demand is lower. In turn, this stored thermal energy can then be used during the day, making the system more efficient and cost-effective.

How exactly does a chiller system work? When a building needs cooling, chilled water is circulated through coils in a building at an entering temperature of approximately 40 degrees. Air is then blown over the coils to produce the cooling effect. Chilled water is supplied to nearly 8 million gross square feet of campus buildings via a direct buried supply and return piping system, which consists of over 12 miles of distribution piping. After the energy is transferred from the chilled water to cool the buildings, the now warmer chilled water (nominally 55 degrees) returns to either the East Plant or power plant and the cycle is repeated. This closed looped system is renewable and self-contained.

The hot water heating system supplied by the geothermal systems works much in the same way as the chilled water system, distributing warm water (120-130 degrees), transferring the energy to the buildings through heating coils and then returning cooler water to the plant to be reheated.

The geothermal system will provide long-term cost savings and is a renewable energy source, which will allow the University to reduce greenhouse gas production and increase energy security. By taking advantage of the fairly constant temperature below the earth’s surface, the network of closed loop water pipes brings heat from the warmer-than-ambient-temperature ground during the winter, and deposits excess surface heat in the cooler-than-ambient-temperature ground during the summer. The new Walsh Family Hall of Architecture will house a second geothermal plant, which will be used to heat that building and others planned in the area, as well as supply chilled water to the campus system at that location. The well field for this plant is located beneath the stadium parking lot.

At approximately 30,000 square feet, the East Plant facility is part of campus utilities’ long-range plan to become more sustainable. The plant should become operational sometime in 2019.

Additional utilities projects in progress or planned for the future include:

Hydro power — The University is working with the city of South Bend and state and federal agencies to permit and construct a 2.5 megawatt hydroelectric facility on the St. Joseph River dam in downtown South Bend. This facility is expected to produce about 7 percent of the campus electrical needs.

Heat recovery — Numerous projects to recover and regenerate energy from existing energy sources are underway or in the planning phases, such as the power plant’s condenser water.

In August 2017, a 140-kilowatt solar array was brought on line to provide green energy to the Kenmore Warehouse located near the airport.

Originally published by Donnetta McClellan at green.nd.edu on January 12, 2018.