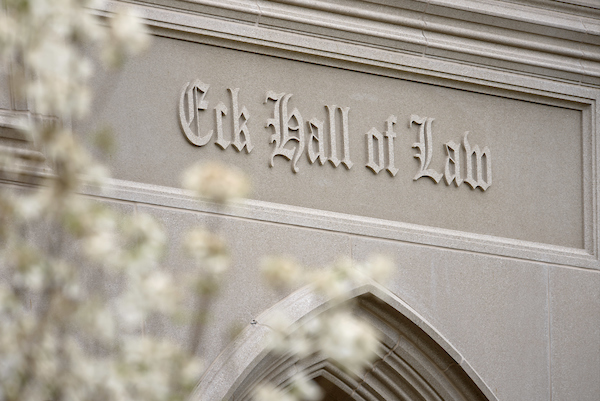 The Bank of America Foundation fellowship covers the cost of salary and benefits for two Notre Dame Law graduates to work for two years at a municipal agency or private nonprofit organization. The fellows’ work must advance social justice by providing legal services to low-income or other underrepresented populations. The opportunity allows fellows to create dream jobs by selecting the organizations where they want to work and designing projects to complete while at those organizations.

Gilmer will be an attorney at the Sugar Law Center for Economic & Social Justice in Detroit during his fellowship. Cisneros Vilchis will be providing consumer financial protection and immigration assistance through the Community Activism Law Alliance in Chicago.

Both men said the fellowships are enabling them to do the type of public-interest work that inspired them to pursue a legal career.

“There are not a lot of opportunities for new attorneys to go directly into the public-interest field,” Gilmer said. “I’m grateful that I’ll be able to do exactly what I want to do, which is to become a people’s lawyer.”

Cisneros Vilchis said, “My grandpa was a lawyer, and he was a big influence on me wanting to go to law school. I also want to help people and decided to pursue a legal career so that I would have better options to help communities.”

Gilmer earned his bachelor’s degree in philosophy at Xavier University of Louisiana. He wanted to go to law school to help people who are suffering from economic inequality. For example, Detroit – where Gilmer was born and raised – is seeing revitalization and rising property values in its downtown area at the same time that the city’s water department is planning to shut off service for nearly 18,000 residential customers with delinquent accounts.

Gilmer was president and co-founder of the Notre Dame Law School Chapter of the National Lawyers Guild during his 3L year. The Sugar Law Center is affiliated with the NLG, which has a mission to use the law in service of people by valuing human rights over property interests.

Cisneros Vilchis, who is originally from Monterrey, Mexico, earned a bachelor’s degree in business administration from the State University of New York at Buffalo.

He was involved at Notre Dame Law School in the Hispanic Law Students Association, the Business Law Forum, the Health Law Society, and the Intellectual Property Law Society. He spent his first summer during law school as a summer associate at Advocates for Basic Legal Equity, or ABLE, in Toledo, Ohio, and spent his second summer of law school as an intern for the Legal Assistance Foundation of Metropolitan Chicago.

Cisneros Vilchis was selected during his 2L year to receive the Peter A.R. Lardy Fellowship – a scholarship award established by Notre Dame Law School’s Class of 1975.

The Shaffer Fellowship is a highly competitive program funded entirely by donors. It pays the fellows’ salaries and benefits to work for two years in a public-interest legal position at any organization of their choosing.

Rafter will work at the Rocky Mountain Children’s Law Center in Denver during her fellowship. Her focus at the organization will be on creating a legal clinic and network of pro-bono attorneys to represent young people who have aged out of foster care.

“I’m incredibly grateful. This is enabling me to pursue my dream,” Rafter said.

“Donations support the Shaffer Fellowships,” she added, “and it’s because of those donations that these foster youths will have the legal representation they deserve.”

Rafter spent her first summer in law school as a judicial intern in Colorado’s 2nd Judicial District and as a law clerk in the Colorado Office of the Child’s Representative in Denver. During her second summer as a law student, she was a summer associate law clerk at Conway, Olejniczak & Jerry, S.C., in Green Bay, Wis. She was involved at Notre Dame Law School in several student organizations, including Legal Voices for Children & Youth, and with other activities, such as GALILEE – an urban immersion program for law students during winter break. She earned a bachelor’s degree in rhetoric and communications in 2014 at Drake University.

Wood, the other Shaffer Fellow, will work for the Animal Legal Defense Fund in Portland, Ore., during her fellowship. Her responsibilities will include working with prosecutors and legislators across the United States on criminal legislation related to animal welfare.

“I went to law school because I wanted to work in animal welfare, and I thought that a law degree would be the most effective way to do that,” Wood said.

“This is my dream job,” she said. “I probably wouldn’t be able to do it without the fellowship. It’s really hard to get entry-level jobs in animal welfare.”

Wood spent her first summer as a Notre Dame Law student as an intern at the Animal Welfare Institute in Washington D.C. She spent her second summer in law school as a clerk in the Animal Legal Defense Fund’s criminal-justice program. She was also highly involved during the academic year at Notre Dame with the Public Interest Law Forum, the Student Animal Legal Defense Fund, and as a volunteer at Pet Refuge, among other activities. She earned a bachelor’s degree in art history in 2013 at the University of California, Los Angeles.

Rafter and Wood both said that Notre Dame Law School’s mission “to educate a different kind of lawyer” and its support for careers in public-interest law were among the reasons they chose to enroll here.

The fellowships are named in honor of Thomas L. Shaffer, the Robert and Marion Short Professor Emeritus of Law at Notre Dame Law School. Shaffer has written nearly 300 scholarly works in his varied areas of legal expertise, making him one of the nation’s most-prolific legal authors. He joined the Law School faculty in 1963 and, during his tenure, was a supervising attorney in the Notre Dame Legal Aid Clinic – now called the Notre Dame Clinical Law Center – where he taught clinical ethics and guided the legal practice of law students who serve underprivileged people in the South Bend area.

A committee of Notre Dame Law School faculty members selects the recipients of the Shaffer Fellowships.

Originally published by Kevin Allen at law.nd.edu on June 12, 2017.