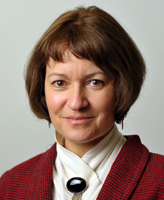 Darcia Narvaez, a professor of psychology in Notre Dame’s College of Arts and Letters, and Nancy Snow, a professor of philosophy at Marquette University, are co-directing a new, interdisciplinary research initiative on virtue, character, and the development of the moral self.

The three-year project is supported by a $2.6 million grant from the Templeton Religion Trust, which funds “discoveries relating to the big questions of human purpose and ultimate reality.”

The “Self, Motivation, and Virtue” initiative will award seed funding to 10 new research proposals. The winning projects will use innovative research methods to explore how individuals develop virtue in their lives and how virtue can be cultivated.

“This is a deeply interdisciplinary initiative,” Narvaez says. “Each proposal we review must involve multi-disciplinary teams. This requirement will ensure that science and humanities work hand in hand. After all, we know that virtue, like life, involves both areas of scholarship.”

The virtue initiative will also produce an interdisciplinary forum, a website, several book projects, and two conferences, one at Marquette and one at Notre Dame. The publishing projects include a book on the science of virtue, co-written by Narvaez and Snow; a co-edited volume featuring articles by the initiative’s research grant awardees; and a co-edited volume of chapters written by moral self researchers.

The research collaborations among scientists, humanists, theologians, psychologists, and philosophers will examine how virtue develops. “We want to take a deeper dive into whether the development of virtue involves memories, genetics, etc.,” Snow says. “In this way, we can develop a more comprehensive picture of how key periods in our lives—adolescence, retirement, physical decline, traumatic incidents—play a role.”

Understanding how individuals develop virtue—and what motivates virtuous behavior—can help families, educators, and communities better address important societal issues, such as bullying, the researchers say. And that goal, they note, aligns perfectly with the Catholic mission of both universities.

Narvaez, who joined Notre Dame’s Department of Psychology in 2000, focuses her research on moral cognition, moral development, and moral character. She is the author of Neurobiology and the Development of Human Morality: Evolution, Culture and Wisdom , due out in August 2014.

The next interdisciplinary symposium takes place September 27-30, 2014, and focuses on pathways to child flourishing.

“My own work is interdisciplinary, so the grant project approach comes naturally to me,” Narvaez says. “But to others it does not. In this new project, I look forward to helping others consider their research through an interdisciplinary lens.”