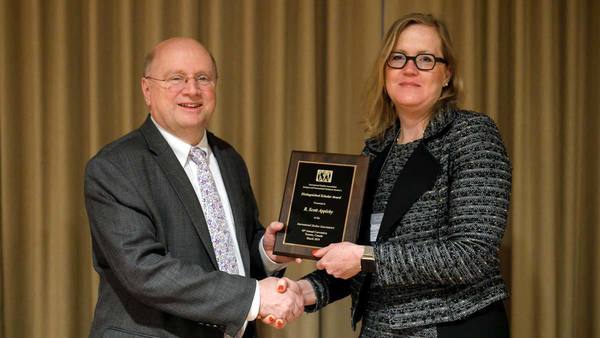 R. Scott Appleby, the Marilyn Keough Dean of the Keough School of Global Affairs, is the recipient of the 2019 Religion and International Studies Distinguished Scholar Award.

Appleby accepted the honor at the annual International Studies Association (ISA) convention in Toronto. The celebration featured an academic roundtable dedicated to Appleby’s scholarship and its contribution to the field of international studies.

“Scott Appleby’s work has brought religion to the attention of academic audiences and clarified how religion matters in the world,” said the committee from the ISA Religion and International Relations Section, which presented the award. “His research has inspired and will continue to inspire debate and scholarship across multiple disciplines.”

The roundtable discussion highlighted Appleby’s development of key concepts in the study of religion and international relations, including fundamentalism; the role of religion in conflict and peacebuilding; sustainable peace; religious engagement; interreligious dialogue; religious engagement in foreign policy; and strategic peacebuilding, a set of practices that aims to transform a society from a state of violence or deep injustice to one of peace.

“Scott Appleby has shown that, while religion can promote political violence and conflict, it can also promote nonviolent civic engagement, development, conflict resolution and reconciliation,” said Scott M. Thomas, associate professor of international relations at the  University of Bath in the United Kingdom, one of nine scholars participating in the roundtable. “Informed by this multifaceted understanding, he has pioneered a policy-oriented approach of the role of religion in international relations.”

Appleby also won praise from colleagues for establishing new and innovative research programs, including Contending Modernities, a major, multi-year project that examines interaction among Catholic, Muslim and secular forces in the modern world; and the Catholic Peacebuilding Network, a group of academics and practitioners that fosters the study and practice of Catholic peacebuilding in conflict-ridden areas. Appleby developed these initiatives during his 14-year tenure as the director of the Kroc Institute for International Peace Studies.

“Directing a peace institute for over a decade and being constantly challenged by the realities of human suffering has grounded Appleby’s work in the dialectic tension between theory and practice,” said Atalia Omer, Keough School associate professor of religion, conflict and peace studies, who participated in the roundtable.

Appleby was named founding dean of the Keough School of Global Affairs in 2014. Notre Dame’s first new school in nearly a century, the Keough School includes nine international institutes and centers, including the Ansari Institute for Global Engagement with Religion, which opened its doors in October 2018.

A member of the Notre Dame faculty since 1994, Appleby is the author or editor of 15 books, including the widely cited volumes of “The Fundamentalism Project” (co-edited with Martin E. Marty and published by the University of Chicago Press); and “The Ambivalence of the Sacred: Religion, Violence and Reconciliation.” Most recently, Appleby co-edited (with Atalia Omer) The Oxford Handbook on Religion, Conflict and Peacebuilding. He also serves as lead editor of Studies in Strategic Peacebuilding, an Oxford University Press series.

Originally published by Renée LaReau at news.nd.edu on March 28, 2019.