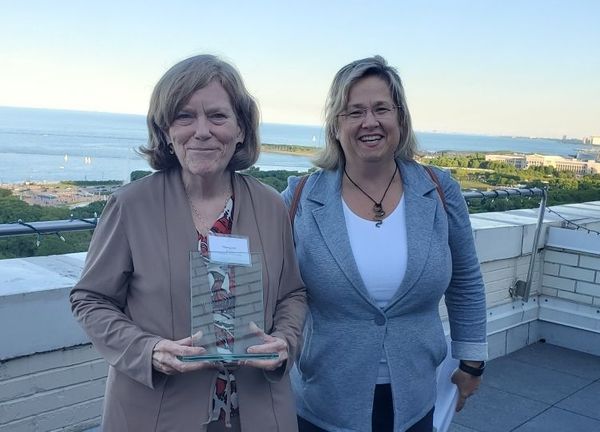 For more than four decades, Professor Margaret “Peg” Brinig has approached her legal scholarship as a quintessential interdisciplinarian. She melds expertise in law and social science with empirical studies of families, social capital, and social welfare legislation.

Her interdisciplinary approach has produced tremendous scholarship in the field of family law — contributions that were recognized last week when the Family Law & Policy Program at the University of Illinois College of Law presented her with its lifetime achievement award.

Brinig received the Lifetime Achievement in Family Law Award on June 13 at a reception at Notre Dame’s Chicago building as part of the International Society of Family Law (ISFL) North American Regional Conference.

The theme of the conference, “Family as the Crucible of Culture and Society: Inequality, Vulnerability, and Justice Within the Family,” blended perfectly with Brinig’s work as a family law scholar dedicated to understanding the inequalities and vulnerabilities many families face.

“Peg paved a new path in family law—she imported into family law the powerful lens of empirical study and law and economics.  Indeed, she was one of the first scholars to bring these critical lens to bear on family dynamics, child protection, and the state’s regulation of families,” said Robin Fretwell Wilson, the Roger and Stephany Joslin Professor of Law at the Illinois College of Law and Director of the Family Law & Policy Program which honored Brinig. “The Lifetime Achievement Award honors not only the great scholars in the field, but those who have given of themselves to build a community of scholars.  Peg is extremely fair-minded and has been a wonderful mentor to emerging scholars blazing their own paths. She has assisted countless international scholars to ready their work for publication, as a peer reviewer and now the editor of ISFL’s International Survey.  We wanted to recognize her for the important impact she has made on on the field across decades.”

This recognition comes as Brinig prepares to retire after 44 years of teaching. She has spent the past 13 years at Notre Dame Law School, where she is the Fritz Duda Family Chair in Law.

One of her pieces recently won The Meyer Elkin Essay Award from the Association of Family and Conciliation Courts.

She has published several books, including “Family, Law, and Community: Supporting the Covenant,” which studies legal reform from the perspective of family dynamics and social policy. The book examines a range of subjects including cohabitation, custody, grandparent visitation, and domestic violence.

“Peg is one of the most productive and original contributors to the field of family law,” said Nell Jessup Newton, the Joseph A. Matson Dean and Professor of Law at Notre Dame Law School.

“One of the most important and significant scholars employing economic analysis to understand family law concepts, she adds to this theoretical foundation the quantitative skills that empirically ground her work,” Newton said. “The timeliness and originality of her work appeal to a multi-disciplinary audience and her involvement with other scholars has spread her ideas across the globe.”

Brinig sits on the executive council of the International Society of Family Law and has been active in national and international law and economics associations. She is a member of the American Law Institute.

She is a fellow at the Institute for Educational Initiatives at Notre Dame, and works closely with the Alliance for Catholic Education. She co-authored “Lost Classrooms, Lost Communities: Catholic Schools’ Importance in Urban America,” with colleague Nicole Stelle Garnett, the John P. Murphy Foundation Professor of Law, and continues to research the impact Catholic K-12 school closures has on low-income neighborhoods.

Brinig co-sponsors the interdisciplinary Program on Law and Economics seminar with Notre Dame Law Professor Dan Kelly. The program provides an economic analysis of the law, including many facets of family law.

“Peg is an invaluable member of our Notre Dame community as a mentor to pre-tenured and recently tenured faculty and as a colleague who can be both generous and critical (in the best use of that term) when reviewing the work of her peers,” Dean Newton said. “She has been an indispensable leader on the University level and in the Law School. It has been a privilege to be her dean and colleague.”

Originally published by Denise Wager at law.nd.edu on June 27, 2019.