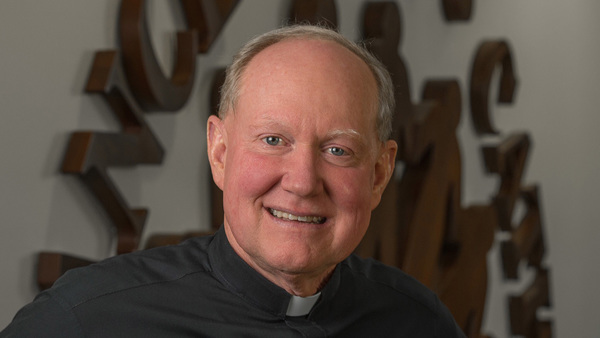 Alliance for Catholic Education (ACE) founder Rev. Timothy R. Scully, C.S.C., announced he will step down from his role as director of the Institute for Educational Initiatives at the University of Notre Dame and become director emeritus of the institute beginning in January.

“During the more than 25 wonderful years leading the Alliance for Catholic Education and 22 years of serving the institute, I have been extraordinarily blessed to contribute to building a mission in service to children in under-resourced Catholic schools with the most talented, faith-filled and committed team of educational scholars and professional practitioners imaginable,” Father Scully said. “I can think of no more fulfilling expression of my vocation as a Holy Cross priest. I look forward to continuing to support the mission of ACE and the institute in any way I can as director emeritus as I continue teaching and research in my home department of political science.”

“As a highly regarded scholar, challenging and popular teacher and creator of the Alliance for Catholic Education, and through his many administrative roles, Father Scully has devoted his life to Notre Dame, its students and its mission,” said Thomas G. Burish, the Charles and Jill Fischer Provost. “In doing so, he has improved the lives of countless students and families. We are grateful for his many contributions.”

A professor of political science and faculty fellow of the Helen Kellogg Institute for International Studies, the Institute for Educational Initiatives and the Notre Dame Initiative for Global Development, Father Scully has long-standing research and teaching interests in comparative political institutions, especially political parties and party systems. More recently, he has also focused on international faith-based education.

Father Scully has written a number of scholarly articles and six books, including his most recent, “Democratic Governance in Latin America,” published by Stanford University Press. He has won multiple teaching awards at Notre Dame, including the Sheedy Excellence in Teaching Award in the College of Arts and Letters, the O’Malley Undergraduate Teaching Award and a Kaneb Teaching Award.

Father Scully founded ACE in 1993 and served as chair of its advisory board until 2013. In 1997, he became the director of the Institute for Educational Initiatives, which today comprises more than two dozen initiatives focusing on the academic quality of and access to faith-based, and particularly Catholic, schools. In addition to ACE, these initiatives include the Center for Research on Educational Opportunity; the Education, Schooling and Society undergraduate minor; the Notre Dame Center for STEM Education; and the Notre Dame Center for Literacy Education.

Under Father Scully’s stewardship, the Alliance for Catholic Education has become the most sought-after source of talent and innovation for Catholic schools in the United States and, increasingly, beyond, contributing to the professional formation of thousands of teachers and school leaders serving in all 50 states. Over the past decade, ACE has focused especially on literacy initiatives in Haiti, improving the reading skills of 36,000 children in that country.

Father Scully’s skill as a leader and educator has been recognized on numerous occasions. Among these recognitions were the 2008 Presidential Citizens Medal presented in a ceremony in the Oval Office, the 2013 William E. Simon Prize for Lifetime Achievement in Social Entrepreneurship, and the 2015 Elizabeth Ann Seton Award (awarded to ACE) for outstanding contributions to Catholic education from the National Catholic Educational Association.

Father Scully is a member of the advisory boards of Notre Dame’s Helen Kellogg Institute for International Studies, Institute for Latino Studies, Rooney Center for the Study of American Democracy and Keough-Naughton Institute for Irish Studies, as well as Saint George’s College. He is also a life member of the New York Council on Foreign Relations, the Inter-American Dialogue and the Latin American Studies Association.

Originally published by Patrick Gibbons at news.nd.edu on September 27, 2019.