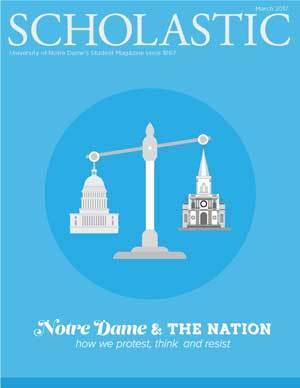 Scholastic, the University of Notre Dame’s student magazine, has won top honors for the second straight year in the annual journalism contest of the Indiana Collegiate Press Association.

Scholastic was named 2018 ICPA Newsmagazine of the Year, winning a total of 28 awards in news, sports, feature and opinion writing, design and photography. The awards were presented Saturday (April 7) at the ICPA annual convention in Indianapolis.

Published monthly, Scholastic was founded in 1867 and celebrated its 150th anniversary this year. It is believed to be the oldest continuously published collegiate magazine in the country. The editor this year was senior Tessa Bangs of Upper Montclair, New Jersey.

The Indiana Collegiate Press Association is made up of 43 student newspapers, magazines, yearbooks and online publications from throughout Indiana.

Scholastic is sponsored by the Notre Dame Division of Student Affairs.

Originally published by Bob Franken at news.nd.edu on April 12, 2018.