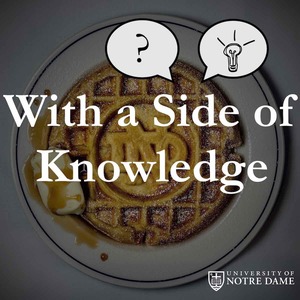 With a Side of Knowledge is a podcast produced by the Office of the Provost at the University of Notre Dame. It brings listeners informal interviews with fascinating scholars and professionals from both Notre Dame and elsewhere that take place over brunch.

The show’s season three premiere, “On Exile, Literature, and Feeling Small Before the Page,” was released Thursday, Aug. 1, and features author Azareen Van der Vliet Oloomi, an associate professor of English at Notre Dame and the winner of the 2019 PEN/Faulkner Award for Fiction, the largest peer-juried prize for novels and short stories in the United States.

Van der Vliet Oloomi was recognized for her second novel, Call Me Zebra, published last year by Houghton Mifflin Harcourt. The judges for the award noted in part “In today’s visual Netflix world, Ms. Van der Vliet Oloomi’s novel performs at the highest of levels in accomplishing only what the written novel can show us.”

Call Me Zebra also won the John Gardner Fiction Book Award and was named a Best Book by a number of media outlets, including Entertainment Weekly and Harper’s Bazaar. Van der Vliet Oloomi was previously the recipient of a Whiting Writers’ Award and honored as one of the National Book Foundation’s “5 Under 35” in 2015.

Host Ted Fox started out by asking her to read from Call Me Zebra, after which they talked about the book, the complicated journey of its unforgettable protagonist, and whether there’s any such thing as original writing.

You can also listen to the episode with Van der Vliet Oloomi using the player below.

Originally published by Ted Fox at provost.nd.edu on August 01, 2019.