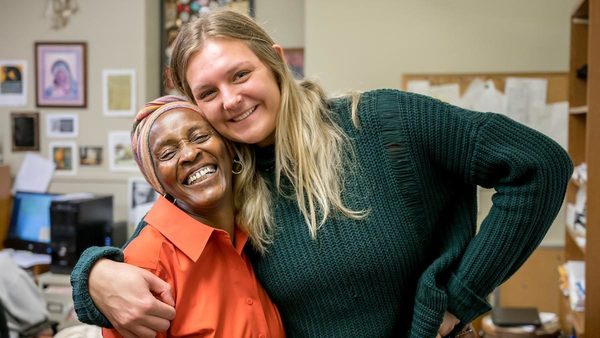 As a student-athlete, Rebecca Nunge, a senior outside hitter on the University of Notre Dame volleyball team, has spent most of her summers on campus — taking classes and training with teammates. But it was only recently that the two-time monogram winner really ventured off campus to engage with the community in a meaningful way.

“My previous experience was primarily on campus; I didn’t really get out in the community that much,” said Nunge, a team captain this year. “So this summer, I feel like I just learned so much about what’s going on here and, honestly, just developed a huge love for the community.”

After a successful junior season on the volleyball court — 26 starts and a career-high 105 blocks and 276 kills — Nunge, a science preprofessional studies (pre-med) major with a minor in peace studies, spent the summer working on HIV/STD and substance abuse prevention and education and juvenile justice reform in South Bend.

As part the new Summer Community Health Innovation Program (SCHIP) at Indiana University School of Medicine-South Bend (IUSM-SB), the Evansville native, who is leaning toward a career in medicine, interned with Imani Unidad, a South Bend-based charitable organization, for several weeks in June and July.

With respect to the youth court, Nunge contributed research to the project and helped to rally support for the court among key stakeholders, including the Boys and Girls Clubs of St. Joseph County, the Notre Dame Robinson Community Learning Center and Transformation Ministries, a Christian-based nonprofit that invests in youth and families in South Bend.

Designed as a diversion program for juvenile offenders who are thought to be a low risk to reoffend based on past behavior, family and school history and other relevant factors, the court would be the first of its kind in St. Joseph County.

“I was the one connecting our organization with other stakeholders in the community,” Nunge said. “So I was emailing them and meeting with them and saying, ‘Here’s what we’re trying to do. We’re trying to build a youth court in South Bend. Do you have any input or perspective?’ And most of the time it was just people saying, ‘We support what you’re doing. How can we help?’”

A path to medicine

Long fascinated by science, Nunge became interested in issues of health and justice in 2016, when she traveled to Israel for Notre Dame’s Jerusalem Global Gateway summer program. The three-week program exposes students to the depth and complexity of life in Jerusalem, a city of some 900,000 residents, as a site of religious, historical and political significance.

There, Nunge observed how poor access to health care in parts of the West Bank, a disputed territory on the border with Jordan that includes East Jerusalem, negatively affected the lives of Palestinian refugees in those areas.

“I had a few weeks to reflect on the trip, and I realized that medicine was going to be the path that I hoped to take to influence the lives of others, reduce suffering and improve the human condition,” Nunge said.

Supported financially by the Leighton Foundation, SCHIP is an eight-week program that engages IUSM-SB medical students and undergraduate and graduate students from other colleges and universities in community-based learning with organizations focused on health-related social needs. IUSM-SB worked with the Center for Social Concerns at Notre Dame to identify such organizations, relying on the center’s years of experience in the area of community-engaged education and research and its long list of existing partners in the South Bend area.

The new program featured 19 students from seven campuses — Saint Mary’s College, Indiana University South Bend, Indiana University Bloomington, Goshen College and Ball State University, in addition to Notre Dame and IUSM-SB. More than 60 students applied for the program. Aside from the internship, which was paid, the program included a classroom component where students participated in didactic discussions about the program and learned about the social determinants of health, and an innovation component where they worked to identify and address critical health-related needs in the community.

In terms of community partners, the focus was on programs “that (didn’t) look like medicine,” such as safe and affordable housing programs, food programs and health and recreation programs that provide access to quality greenspace, according to Joe Kotva, an adjunct professor at IUSM-SB and co-director of SCHIP.

“If you’re concerned about individual and community health, you have to put your time and energy into places that don’t look like typical doctors’ offices,” said Kotva, a former pastor and an author whose book, “On Moral Medicine: Theological Perspectives on Medical Ethics,” remains the definitive anthology for Christian theological reflection on medical ethics. 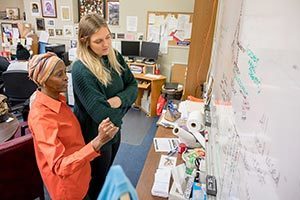 Housed in the Colfax Cultural Center, a historic former school building on South Bend’s near west side, Imani Unidad easily fits that description. Founded in the early 2000s, the organization offers comprehensive risk counseling services for individuals living with HIV, challenged by substance abuse or burdened by detrimental interactions with the criminal justice system. The organization also provides community-level education and training with a focus on HIV/STD and substance abuse prevention and education.

“We create a safe space for those we serve to deal with their personal hurts and personal pains,” said Debra Stanley, founder and manager of Imani Unidad.

In doing so, the organization focuses on restorative justice, a form of justice that emphasizes rehabilitation through reconciliation with victims and the community as a whole, but also personal reconciliation.

“Restorative justice is about healing the hurt done to someone else,” Stanley said. “Well, when you commit a crime, the first person you hurt is yourself. So we’re helping people restore themselves, forgive themselves, make amends in their own souls. Because if I can come to peace within, then I can be a peaceful person within the community.”

That approach, along with Stanley’s reputation as a trusted voice in the community on issues of health and justice, persuaded Cynthia Nelson, executive director of the JJC, to partner with Imani Unidad on the project.

“Knowing Debra Stanley, her group felt like the perfect fit because of her work with peer-to-peer counseling, her work with restorative justice … (and) her long history of working with youth in the community,” Nelson said.

Ultimately, Imani Unidad would manage the court, Nelson said, based on evidence of better outcomes for community-run youth courts compared with government-run courts.

A different kind of court

So, what is youth court?

Generally speaking, youth court is a problem-solving court that serves as an alternative to the juvenile justice system, with young people, including those with past contacts with the criminal justice system, assuming one or more of the traditional courtroom roles, from prosecutor and defense attorney to juror and even judge. Adjudication is is peer-driven, with a focus on restorative/reconciliation processes. Examples include service learning, tutoring, counseling, drug testing, peer mediation, restitution, knowledge- and skills-based activities, peer-to-peer group support and/or oral or written apologies. Young people who successfully complete the program avoid a criminal record.

“Because it’s an education-based court, by the end of it, the youth who go through it understand the judicial system much more holistically,” Nunge said, and leave “equipped not to make the same mistakes again.”

But the benefits don’t end there. Youth courts also cost less to administer than traditional juvenile courts, Nelson said. They help educate non-criminal youth about the justice system. And they impose fewer costs on respondents and their families in terms of lawyer’s fees and other court-related fees and fines.

“Diversion in general, if it’s done right, provides cost savings,” Nelson said. “Not to mention the life benefits for kids and families.”

Here, a jury composed of student volunteers and ex-offenders would work with police, prosecutors, judges and other court officials and community partners to adjudicate cases involving young people accused of low-level offenses such as theft, vandalism or underage drinking. The cases would be heard in a non-courtroom setting, outside of the JJC, so as not to confuse the process with a criminal proceeding, Nelson said.

“We want to prevent the criminalization of children and provide services to (young people) to address those issues” that lead to criminal behavior, Stanley said of the purpose of the court — issues such as poor mental or emotional health, food insecurity or a lack of parental supervision at home.

Stanley, who also worked for AIDS Ministries for 11 years, recalled a recent visit to a youth court in southern Indiana, where a young person with no food at home was awaiting trial for stealing food.

“Why are we criminalizing that?” she said.

That’s consistent with peace studies, part of the Kroc Institute for International Peace Studies, which asks, in part: “What effect does violence have on individuals, and how can we use this knowledge to improve life in communities affected by violence?”

Nunge remarked, “I’ve learned a lot about restorative justice in peace studies, and Imani Unidad is trying to make criminal justice in general in South Bend much more restorative and much less punitive.”

Nunge was among three SCHIP interns assigned to Imani Unidad. The other two, also women, were from Notre Dame and Saint Mary’s. The Notre Dame student, Jocelyn Keranen, is a recent graduate of the master’s in global health program at the Eck Institute for Global Health.

Stanley, speaking of the women, said, “They became such a critical part of who we are,” describing the “big empty hole” left by their absence. “Just the passion, the intensity, the humanity that they brought to the work,” Stanley said. “And just seeing them transform through their interactions with the community. That’s the whole goal, to supplement academia with real-life experiences, and they did it.”

For Nunge, the experience reinforced her belief in the healing power of justice, and deepened her connection to and affection for the South Bend community.

“It’s just given me this valuable perspective that, in this area, there’s so much more than what’s going on at Notre Dame. Notre Dame is such a rich, valuable resource for students, and there are so many ways the University helps students get involved in the community,” Nunge said. “But there’s this really passionate community outside of Notre Dame, too, that’s up-and-coming and wants to make a difference and believes in itself. And I realized I should pay attention to that as well.”

Originally published by Erin Blasko at news.nd.edu on November 26, 2018.