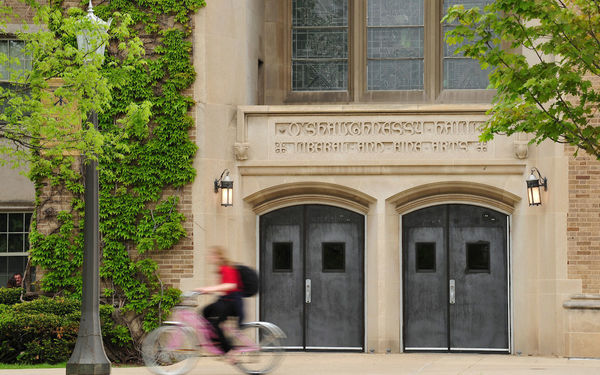 Looking through new lenses, a Ph.D. candidate and two recent alumni of Notre Dame’s Ph.D. program in history have developed innovative lines of research that are adding depth to the topics of British imperialism, comparative colonialism, and human connections to animals.

“We’re very proud of these young scholars, and they’re great examples of how we prepare students to go out and do exciting history research and get exciting jobs,” said Jon Coleman, a professor of history and chair of the department.

All three have obtained either tenure-track faculty positions or fellowships, and two finished their degrees in five years — a lofty goal set by the department and College of Arts and Letters and incentivized through the 5+1 Postdoctoral Fellowship Program.

“In a lot of ways, they represent the success and the shift in priorities of the department and the College to help students finish their dissertations in a timely fashion,” he said. “This shows how successful these students can be.” Samuel Fisher had two passions entering Notre Dame as an undergraduate — history and Irish. He found a way to explore both by studying comparative colonialism.

“Notre Dame is one of the few places where I could have done a project that is deeply engaged with the American Revolution and the 18th-century British empire, but also includes the colonial portion and the Irish language,” said Fisher, who received a bachelor’s in history in 2011 and completed his Ph.D. this spring.

Now an assistant professor of history at the Catholic University of America, Fisher examined how the origins of the American Revolution relate to Ireland.

American colonists saw London making certain concessions to Ireland in the mid- to late 1700s, which set off bad feelings across the ocean, he said.

“Americans thought they were partners in the empire. But they saw this, and they didn’t feel like they were getting as much,” Fisher said. “They thought the people who were supposed to benefit as part of the empire were like them — Anglophiles, protestants.”

Fisher credits some of his success to the concerted efforts in the department to help graduate students develop relationships with top academics.

“The number of scholars I was able to meet from outside Notre Dame was really critical,” he said. “Many historians came to give seminars and workshops. And the department offered events for graduate students to learn how to network. It helped us understand how scholarship is collaborative.” Rachel Banke, who completed her Ph.D. this spring, is interested in the realities of imperialism on American colonists, with an emphasis on the period after the Seven Years’ War (1756–63).

It’s a time, she says, of major change in the colonies when the British Empire was rethinking how it managed its vast holdings. Changes in the style of British leadership played a key role in the later American Revolution.

As prime minister in 1762–63, John Stuart, the Third Earl of Bute, agreed to provide security to the French and some American Indians in the American interior, but required obedience to strong executive rule. Those from the 13 original colonies bristled as they saw the needs of these new subjects held above their own.

“That game worked for the people he was incorporating into the colonies,” Banke said. “But the British colonists got upset. They thought this was a coordinated effort to reduce their rights and status in the empire.”

For her research, Banke traveled to England and Scotland to explore little-used papers from King George III in London’s National Archives and in Stuart’s private collection on the Isle of Bute.

The opportunity would not have been possible without support from Notre Dame’s Nanovic Institute for European Studies, Keough-Naughton Institute for Irish Studies, and the Department of History, she said.

“This was an ideal place to do a transatlantic project,” Banke said. “The coursework and faculty advisers in the Department of History provided me with the foundation for what I was doing.”

Banke is serving as a postdoctoral researcher at Notre Dame for the next year. Ph.D. candidate Janice Gunther Martin was awarded a 2017–18 Graduate Student Fellowship at the Notre Dame Institute for Advanced Study, where she will engage with an  interdisciplinary community of scholars from around the world while completing her dissertation.

Martin, who has master’s degrees in both history and chemistry, is interested in how human beings have engaged with and defined the natural world and their place within it, especially with respect to science and medicine during the early modern period.

Her dissertation focuses on the history of human-animal interactions, specifically the treatment of horses in Spain during the early modern period.

“Equines were so fundamental in Castille at this time for transportation, agriculture, and at the elite level for horsemanship,” Martin said. “Despite the significance of animals in early modern society, the field of early animal studies is only beginning.”

Many lessons can be learned about a society based on how it treats animals, Martin said. And Notre Dame’s History and Philosophy of Science program and renowned Medieval Institute help make the University a perfect place to explore those kinds of questions, she said.

“Notre Dame takes intellectual history and the history of science seriously,” Martin said. “So many professors in the Department of History are interested in engaging in questions across multiple disciplines. Crossing disciplinary boundaries in order to address important issues is also a goal of the Institute for Advanced Study, which makes me even more excited to embark on this fellowship year.”