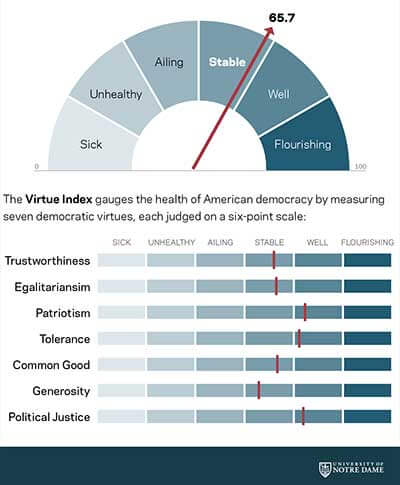 In a current political environment that some view as divisive and extremely partisan, a new Democratic Virtues Index from the University of Notre Dame’s Rooney Center for the Study of American Democracy examined the health of American democracy, and found the state of the country’s democratic health to be in stable condition.

Led by David Campbell, the Packey J. Dee Professor of American Democracy and political science department chair, the Virtues Index analyzed data from a national survey of 2,000 respondents designed and conducted by a team of 16 Notre Dame undergraduate students, with assistance from the Robert A. Fox Leadership Program at the University of Pennsylvania.

The results in each category were ranked on a six-point scale including sick, unhealthy, ailing, stable, well and flourishing. None of the virtues were categorized as flourishing, according to the survey data. Americans scored highest (in the “well” range) on patriotism, tolerance and political justice while egalitarianism, trustworthiness, common good and generosity scored lowest as “stable.”

To gauge the health of the American democracy, the Virtues Index measured the following virtues (index scores by category listed):

1. Trustworthiness (60.65, Stable) — the ability to be relied on as honest or truthful. Question example: If a cashier gave me too much change, I wouldn’t return it.

2. Egalitarianism (63.5, Stable) — a belief in human equality with respect to social, political and economic affairs. Question example: Not all people deserve the same opportunity to get ahead in life.

3. Patriotism (72.99, Well) — love or devotion to one’s country. Question example: Although at times I may not agree with the government, my commitment to the U.S. always remains strong.

4. Tolerance (68.60, Well) — sympathy or indulgence for beliefs or practices differing from or conflicting with one’s own. Question example: I often try to understand other people better by seeing things from their point of view.

6. Generosity (56.21, Stable) — giving one’s own time, energy and/or possessions to others. Question example: I give a substantial amount of my own time or money to charitable causes.

7. Political justice (71.68, Well) — for political figures and average citizens, acting in a fair manner during the political process. Question example: Government officials should spend just as much time listening to people who didn’t vote for them as the people who did.

The overall result of “stable” (with a score of 65.7) indicates a relatively healthy environment with room for improvement, according to Campbell.

The study also included data on “crosstalk,” or contact between individuals across partisan lines. The results found that the state of the American democracy is more united than divided, but still has significant room for growth, especially among “Gen Z” and Millennials. Only 53 percent of respondents in that age group felt that political crosstalk was worthwhile.

Campbell assessed the results as offering a path forward to greater civility and understanding. “When we talk with rank-and-file Americans, we find that, for the most part, they exhibit the democratic virtues our students identified as critical. Nonetheless, there are causes for concern — especially when it comes to how much Americans talk to people with a different political view than their own,” he said. “If there is one lesson to be learned from this study, it is that we all could do more to break out of our ideological cocoons. Find someone who has a different point of view and take them to lunch.”

Campbell plans to have his students revisit the survey annually with an expectation that index will provide an annual check-up on the nation’s democratic health.

Originally published by Sue Lister at news.nd.edu on March 29, 2018.