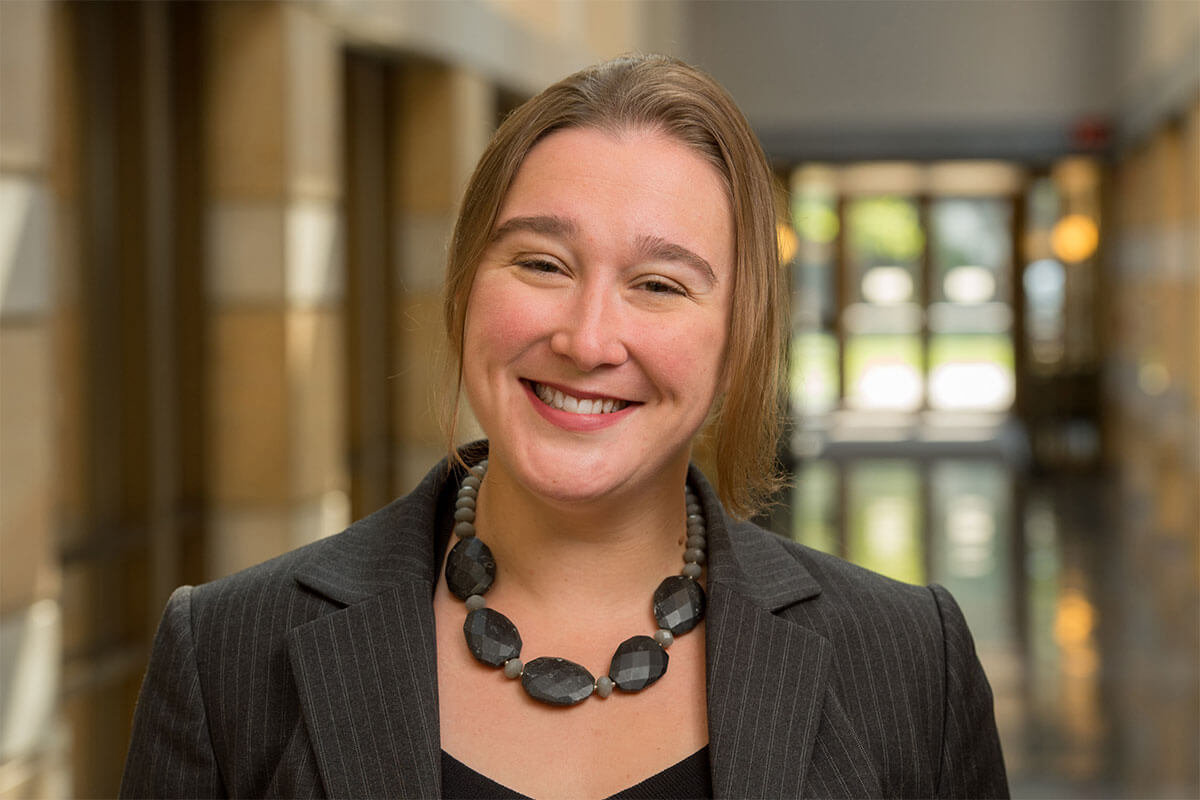 McDonnell, the Kellogg Assistant Professor of Sociology at Notre Dame, is examining certain pockets of government in Ghana and other countries to determine how they are succeeding.

“If we open up the government and think of it not as a singular entity but as lots of small, moving pieces, we can see that there are parts of those governments that work incredibly well,” she said. “Despite a long list of challenges, some Ghanaians on the ground are making it work. To understand how they manage to do that is really important.”

McDonnell, who came to Notre Dame in 2012, has spent a total of almost two years in Ghana conducting fieldwork for her upcoming book, tentatively titled Patchwork Leviathan: Subcultures of Bureaucratic Effectiveness in Developing States.

Her work has already garnered three awards from the American Sociological Association for her article, “The Patchwork Leviathan: How Pockets of Bureaucratic Governance Flourish Within Institutionally Diverse Developing States.” Published in the American Sociological Review in 2017, the article received awards from ASA’s Theory section, Organizations, Occupations & Work section, and Sociology of Development section.

“Practically speaking, you always hope that your research can inform, can help solve a problem. If we could think about ways to enable the flourishing of more of these pockets of effectiveness, elsewhere in Ghana and outside the country, I think that’s the high-end dream."

Redundancy can be positive

In her research, McDonnell has identified four highly effective niches within the Ghanaian government — the monetary policy research group within the central bank, a research group in the Ministry of Finance, the Ghana commercial courts, and a branch of the National Communications Authority. While the roles of the four departments are quite different, McDonnell found some surprising similarities in their approach. 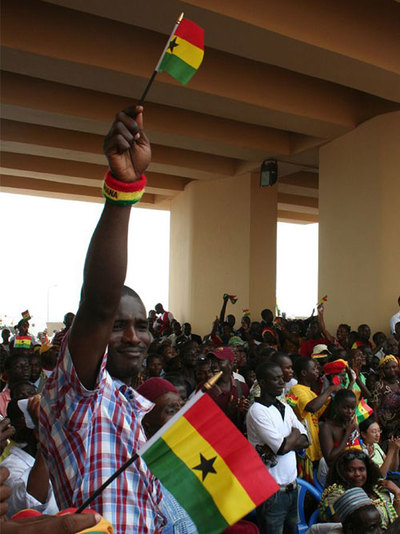 A man waves a Ghanaian flag at a 2007 rally celebrating the country’s 50th anniversary of independence from the United Kingdom.

One key example, she said, is the concept of intentional redundancy.

“They build in redundant capacities in terms of the types of skills that people have, and even the information that people have,” McDonnell said. “In the U.S., we tend to think of everything as optimally efficient if you have these discrete jurisdictions. From an organizational perspective, it seems odd and inefficient to us.”

However, because of the turbulent external environment in which these organizations operate — including social demands and health issues U.S. employees do not typically face — the redundancy actually ensures stability and continued productivity, she said.

“If you look at engineering systems, when people engineer for chaotic environments like outer space, the best thing they can do is to build in redundant systems,” McDonnell said. “You sacrifice efficiency in the name of effectiveness and an increased certainty that it will actually work.”

McDonnell has also developed a number of comparison cases for the book, using secondary sources to analyze other high-functioning pockets of government in China, Brazil, Kenya, and Nigeria.

“There was a similar underlying logic to how they worked, and that gave me the sense that this is a fairly general phenomenon,” she said. “Some of the features that are apparent in Ghana also appear everywhere else.”

McDonnell first became interested in state and political sociology in while pursuing her Ph.D. at Northwestern. At the time, she said, a lot of exciting research was being published about how certain previously poor countries or regions had accomplished tremendous economic and social growth. 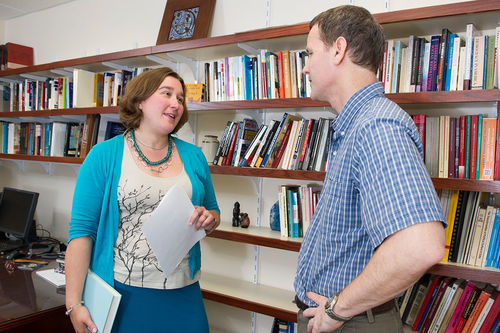 McDonnell, a faculty fellow of the Kellogg Institute for International Studies, talks in her office with former visiting fellow Robert Woodberry.

“In the mid-20th century, the GDP of South Korea was very comparable to Ghana’s, and now, it’s comparable to any of the wealthy countries in the world,” McDonnell said. “I wanted to understand whether Ghana, which had also done some aggressive development planning, failed because they aimed for the wrong policies or because they had good ideas but their execution had fallen short.”

Ultimately, she hopes to be able to move the scholarly discussion of what is happening in African states like Ghana beyond its failures and the misconception that solutions come only from outside the country.

“Practically speaking, you always hope that your research can inform, can help solve a problem,” she said. “If we could think about ways to enable the flourishing of more of these pockets of effectiveness, elsewhere in Ghana and outside the country, I think that’s the high-end dream — that someone somewhere has a state that is able to do a little more for them, that is able to be a little more effective.”

The excitement of research

A concurrent assistant professor in the Department of Africana Studies and the Keough School of Global Affairs, McDonnell said Notre Dame has been an ideal fit for her research interests.

“When I entered the job market, I thought I might have to downplay the extent to which I did fieldwork in sub-Saharan Africa,” she said. “But here, instead, was this interdisciplinary position at Notre Dame for exactly what I did. To be able to say, this is what I love, what I’ve dedicated my career to and that’s exactly what they want, that is really exciting.”

McDonnell also appreciates the collegiality and the diverse range of research interests among her colleagues in the Department of Sociology. 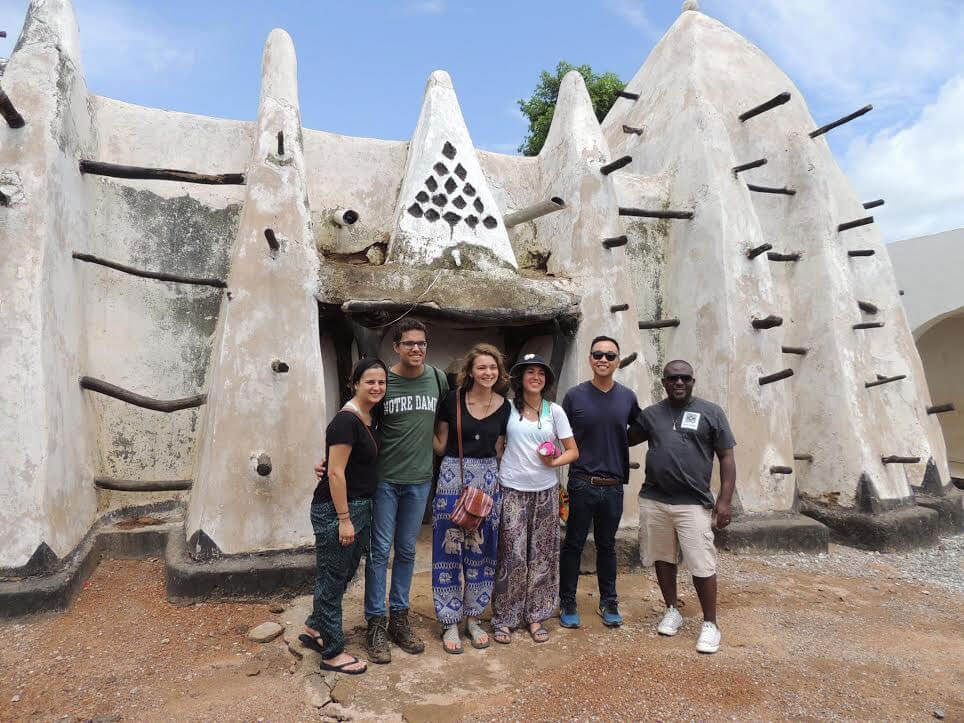 “Not only is everyone friendly, but they’re all intellectually curious,” she said. “So you can talk about your project with someone who works on a completely different topic, and they’re interested and ask questions. That has really helped me express my ideas in a way that speaks to a general sociology audience. I think that is relatively rare in the academy, and it’s a really special thing about being here.”

This year, McDonnell is teaching a graduate course on international and global sociology, as well as an undergraduate class on international research design. In the classroom, she hopes that stories of her own research experiences will inspire and empower her students.

“I try to cultivate in my students a taste for the excitement of research that I myself have felt,” she said. “I want them to know what it’s like to have the beginnings of a puzzle about how the world works and to have the passion and the ability to follow through and figure it out.”

Originally published by Carrie Gates at al.nd.edu on November 08, 2018.