If history is any indicator, plasmas (or electrified gases) and water make great partners. For centuries bringing a plasma into contact with water has led to remarkable advances in science and technology … from the discovery of ozone and argon to the development of one of the first commercial processes to produce fertilizer. Even today plasmas are used in large communities to purify water supplies and in industry to decontaminate surfaces. Yet, there remain many questions about how these interactions take place, specifically what happens when an electrified gas touches water? What happens to all the gas chemicals? Most important, what happens to the electrons, the particles carrying the “electricity”? This is the work that a team of researchers led by David Go, associate professor of aerospace and mechanical engineering at the University of Notre Dame, have been pursuing. 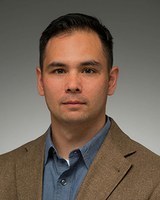 In fact, a new study from the group, which is in the June 19 issue of Nature Communications, shows that electrons from an atmospheric-pressure plasma can be dissolved [solvated] into water — forming a thin layer of “solvated” electrons. Equally as important, the team has also proven that using the plasma approach, solvated electrons, which are among the most powerful chemical agents in nature, can be generated without expensive vacuum equipment [to pressurize or depressurize the plasma] or the use of harmful radiation. The resulting chemistry from the solvated electrons promises a variety of potential applications ranging from environmental remediation and water purification to materials synthesis and cancer therapies.

Go and his team have demonstrated that when plasmas are brought into contact with water, the free electrons are transferred from the plasma into the liquid, where they become solvated [dissolve]. However, because the solvated electrons are so highly reactive to the other chemicals and elements in solutions, they have an average lifetime of only one millionth of a second, making them difficult to observe. “While bringing plasmas into contact with water has a very long history, including a critical role in the discovery of ozone and argon, this is the first time anyone has produced direct evidence that electrons formed in the plasma are injected into the water. This is an important step in understanding the extremely complex environment at the plasma-water interface,” said Go. 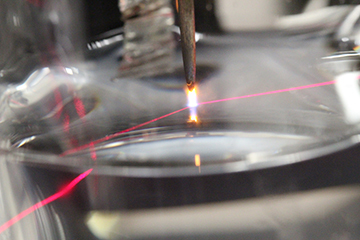 In order to see the solvated electrons, the team had to build a sophisticated optical absorption device. The measurement procedure, which was primarily developed by Go’s Ph.D. student Paul Rumbach, uses something called total internal reflection absorption spectroscopy. According to Rumbach, “We shine a red laser beam up to the water surface underneath the plasma where the solvated electrons are, and the electrons absorb some of the light from the laser beam. The beam reflects off the surface into a detector, which tells us how much light was absorbed.”

Overall, Go’s team found that the solvated electrons only penetrated about 2.5 nanometers below the water surface, which corresponds to about 5 layers of water molecules. Although others have hypothesized that plasmas will produce solvated electrons in water, this is the first direct observation of the phenomenon. Team member David Bartels, radiation chemist at the University, said, “I am not surprised that we were able to see the solvated electrons, but their spectrum was not what we anticipated. We have a lot more work to do to understand the very high electric field environment at the water’s surface.”

Historically, solvated electrons have been produced using high-energy ionizing radiation, such as gamma radiation, or electron beams. Atmospheric-pressure plasmas offer a simple, cost-effective alternative, free from harmful radiation and expensive vacuum equipment, that Go’s team — Go, Rumbach, Bartels, and chemical engineer R. Mohan Sankaran from Case Western University — believes will help pioneer new territory in the fields of radiation chemistry and electrochemistry and provide significant use in both fundamental research and the development of new technologies.

The paper appeared in the June 19, 2015, issue of Nature Communications.