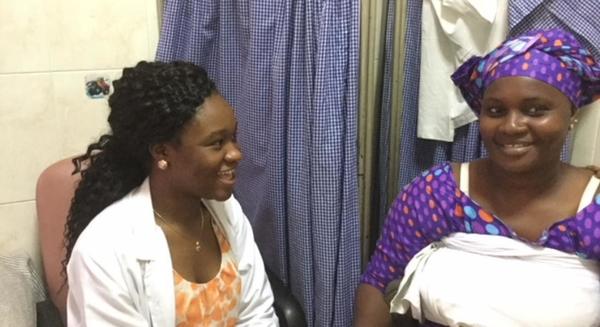 When Eunice Agyapong ‘19 traveled to Ghana for the first time as an adult, she didn’t expect to be surprised by what she saw in her parents’ homeland.

But she was – by the families she saw sleeping on pieces of cardboard on hospital floors so they could be near their sick loved ones. By the overcrowded maternity units. And by the way her hairstyle and accent marked her as an outsider, even though she spoke the local dialect almost fluently.

“That was really shocking to me, to be seen as a foreigner,” said Agyapong, an aspiring physician studying international development through the Kellogg Institute for International Studies. “I went in thinking, I’m Ghanaian so I understand the country, but I found out there’s still a lot to learn.”

To that end, the biological sciences major has spent the past two summers conducting research in a Kumasi hospital on doctor-patient relations. In the process, she’s learned firsthand about the seemingly intractable problems facing the country’s medical system, from a lack of supplies and doctors to the difficulties rural patients face in traveling long distances for treatment.

She plans to eventually practice medicine in the United States and later open a hospital in Ghana so she can treat disadvantaged and underserved communities in both countries. In the meantime, she views the Kellogg Institute as a stepping stone to medical school and to an eventual career in global health.

“When I came across Kellogg, I thought, yes, that’s me,” she said, explaining that she decided to attend the University of Notre Dame because of the Institute. “I could see myself developing my passions and getting into to what I want to do at this school.”

In particular, she was drawn to its International Development Studies minor because of its interdisciplinary focus.

“I really liked the approach of solving problems and coming up with creative solutions, not just focusing on one field, like sociology or politics or economics,” she said. “If you want to deal with global challenges, you can’t just look at them from one perspective. You have to look at it from different disciplines because they’re very complex.”

Agyapong’s parents moved from Ghana to New York in the early 1990s in hopes of finding more opportunities in the US. She spent time in Ghana as a child, but was reintroduced to the country through an Experiencing the World Fellowship in the summer of 2017, when she conducted field research on the use of religious language between doctors and patients.

Religion heavily influences Ghanaian culture and social identity, and, as expected, she found that the use of words of faith improved doctor-patient communication.

But she was surprised to find that patients often felt their doctors looked down on them. In turn, doctors were often frustrated by what they perceived as patients’ passivity and a lack of interest in following through with treatment.

The fraught physician-patient dynamic became the subject of her research in Ghana, funded by a Kellogg-Kroc Research Grant, in the summer of 2018. She found that the stress of the consultation day impacted how both sides viewed their interactions, with long wait times and a high doctor-patient ratio contributing to tensions.

Faculty Fellow Paul Ocobock, an associate professor of history and Agyapong’s advisor, said there’s often a huge class disparity in Ghana between highly-educated doctors and their patients, who may be farmers, market entrepreneurs, or teachers.

The stark differences make it harder for doctors and patients to communicate and have real implications for patient health.

“It prevents people from getting the care they need if they don’t feel comfortable seeing a health care professional,” he said, noting that Agyapong’s findings may also be relevant in the US, where differences in doctor-patient backgrounds exist to a lesser degree.

He said Agyapong is rigorous in her research methods and passionate about both her Ghanaian heritage and how health care is delivered in Africa.

“She’s part of a generation of Notre Dame students from African families who are now going to Africa to do research,” he said, bringing with them a cultural competency and self-awareness that makes them particularly effective.

“She’s not there to tell people how to do their jobs or to impose a certain kind of development. She’s there to listen and to work with them. This goes a long way in dispelling an imperialist mindset with which development practitioners still struggle. Listening is crucial.”

Today, Agyapong credits the Kellogg Institute with helping her connect development theory with practice by funding her research in Ghana. Her time there has helped her learn the importance of listening – both as a researcher, and as a future doctor.

“It’s important to know what the needs of the patients are, not just what they need from me physically, but what they need from me as a person, emotionally, spiritually, socially,” she said. “That’s what my minor has actually taught me – human dignity is at center of all of this, and I want to be coming at it from a place of humility.”

She’s also taken to heart some advice a Ghanaian doctor gave her when she described her frustration at being viewed there as a foreigner: to view her heritage as a blessing that can empower her to help others.

“In Ghana, they see my access to both cultures as something that will give me a unique perspective in making a difference there,” she said.

Originally published by Rowland, Ashley at conductorshare.nd.edu on November 26, 2018.