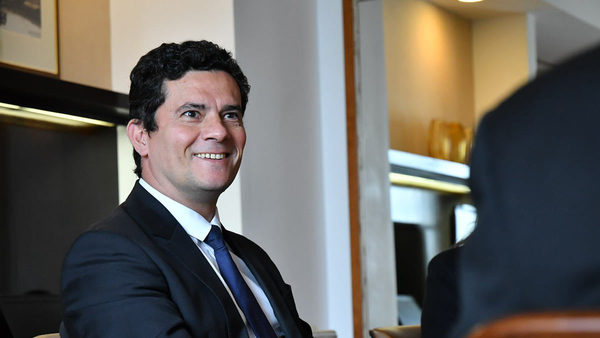 Brazilian Judge Sérgio Moro, a leader in his country’s anti-corruption movement, will receive an honorary degree and serve as principal speaker at the University of Notre Dame’s 173rd commencement ceremony May 20 (Sunday).

The University’s president, Rev. John I. Jenkins, C.S.C., who presented Moro with the Notre Dame Award at a ceremony Oct. 2 in São Paulo, said, “It was privilege to meet with and hear from Judge Moro earlier this month. He is a shining example of someone who lives out the values we seek to inspire in our students. I am pleased he has accepted our invitation and know that he will offer valuable observations to our Class of 2018.”

In presenting the Notre Dame Award, Father Jenkins said that Moro is “engaged in nothing less than the preservation of his nation’s integrity though his steadfast, unbiased application of the law. By addressing the pernicious problems of public corruption in a judicious but diligent way, Dr. Moro has made a marked difference for all Brazilians and for humankind at-large in our universal thirst for justice.”

Moro is a federal judge in the southern city of Curitiba who has gained international recognition and commendation in recent years for his sentencing of powerful Brazilian politicians and business leaders on corruption charges. Most recently, as part of a four-year investigation of the state-controlled oil company Petrobras, he sentenced former Brazilian President Luiz Inácio Lula da Silva to nearly 10 years in prison.

Modeling his approach on Italy’s “Clean Hands” corruption investigation of the 1990s, Moro also has played an integral role in the “Banestado” case that led to the prosecution of 97 people on corruption charges, and Operation Farol da Colina, in which the judge called for the preventive arrest of 103 suspects for committing money laundering, tax evasion and other crimes.

His work on these cases recently was profiled by “60 Minutes,” NPR and the New York Times.

Moro, 45, was raised in Maringá, a city in the southern state of Paraná. He earned a bachelor’s of law degree from Maringá State University and a doctorate from the Federal University of Paraná. He studied abroad through an exchange program at Harvard Law School in 1998.

Appointed to his current position in 1996, he participated in 2007 in the U.S. State Department’s International Visitor Leadership Program, visiting U.S. agencies and institutions responsible for preventing and combating money laundering.

Originally published by Dennis Brown at news.nd.edu on October 30, 2017.