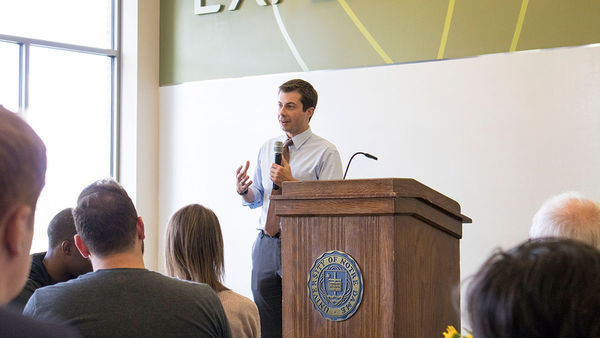 The IDEA Center at the University of Notre Dame invites wonderful speakers to its Innovation Rallies, organized each Friday of a home football weekend. ESTEEM students have a front row seat, and last week, they welcomed Mayor Pete Buttigieg, one of America’s youngest mayors and currently serving his second term leading the City of South Bend.

Mayor Pete was born and raised in South Bend, son of two Notre Dame professors, and now he serves as the head of a cutting edge and transparent city administration. He is acting as the chief architect of South Bend innovation, creating a community where all can experience acceleration and growth, directly benefitting from innovative thinking.

He began the talk by briefly introducing his work and warmly welcoming everyone new to the South Bend community. He presented an engaging analogy, that if he as mayor could have a magic wand, from which he could ask anything for his city, he would ask for a world-class research university. How lucky the case is, that South Bend has its own, the University of Notre Dame. He not only has the vision of harmonizing the activity of the city with the productive power of the University, but he has already established pathways to realize this.

He invited IDEA Center employees, researchers, ESTEEM students, and entrepreneurs to think about how our own passion for innovation can solve a problem for the city, and pursue that idea.

Mayor Pete thinks South Bend is the perfect place for testing a new idea, whether a new policy or a new technology. The community is big enough to have significant problems waiting for a solution, but at the same time, the size of the city is ideal for controlled testing and experimentation of such solution. He eagerly waits for new ideas to be implemented, and he believes that South Bend community is very supportive as well.

There are already ways to get involved with the innovative work of the town, by joining EnFocus, a team of interns and problem solvers for entities in the South Bend area. Moreover, there are internship positions open for students at the Mayor’s Office, to directly contribute with the leaders on building a better city.

Mayor Pete strongly believes that is not a coincidence that a mission-driven institution like Notre Dame is situated close to the supportive community of South Bend. He stressed how powerful Notre Dame talent can be, if it is paired with the purpose of building something great beyond the campus as well.