A group of Notre Dame Law students traveled to Texas during winter break to put into practice the Law School’s mission of educating a different kind of lawyer. They spent a week providing legal assistance to immigrant women and children who are seeking asylum in the United States.

“At Notre Dame, we are taught to be a different kind of lawyer and to view the law as a calling to promote social justice,” Ibanez said. “Doing my part to fight for justice for asylum seekers heeds that very important calling to serve the underprivileged and vulnerable members of society.” 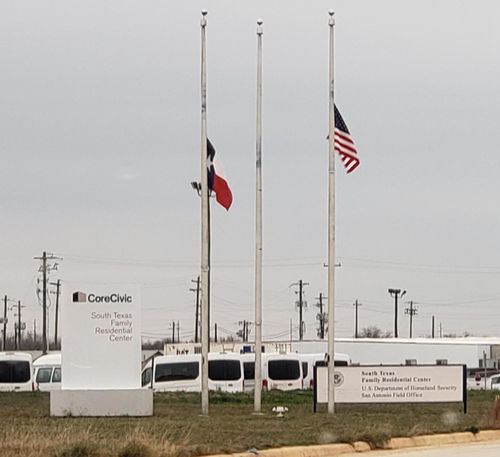 The volunteers worked at the South Texas Family Residential Center in Dilley, Texas, with the Dilley Pro Bono Project, a program run under the umbrella of the Immigration Justice Campaign. About 1,000 mothers and children seeking asylum from violence in Honduras, Guatemala, and El Salvador are being detained at the facility.

The group’s primary work was explaining the asylum process to the women, listening to their stories, and helping them prepare for their “credible fear interviews.” The interview is the first step in the asylum process. It is where the applicants explain to immigration officers why they are afraid to return to their home country. If they are found to have sufficient credible fear they are released from detention and are able to move on in the asylum process.
Monterrosa and the students led workshops to prepare the women for their interviews and advised them on how to support their case in the most helpful way.

“Professor Monterrosa was encouraging and supportive. He helped me feel confident engaging in the process and taking charge of the opportunities afforded to volunteers at the center—to learn through practice,” Rengifo said.

Andrini had the opportunity to accompany a woman to her credible fear interview.

“This was a very revealing experience because even though the woman had been prepped for her interview, she was extremely nervous and had great difficulty explaining her story. This reaffirmed the importance of having representation for asylum seekers,” Andrini said.

At the end of the interview, the immigration officer allowed Andrini to ask the woman follow-up questions to help pull out the more important points of her claim. She ultimately received “a positive” from the interview so she could be released from custody and continue with the asylum process. 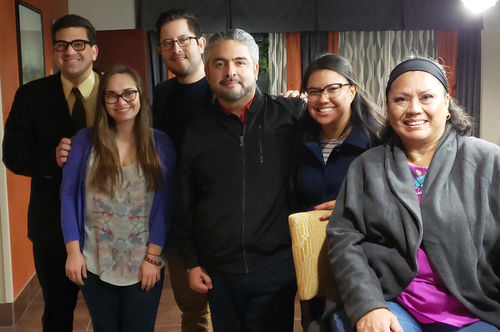 Most of the women they met with were fleeing extreme gang violence or domestic violence within their homes and viewed violence as a normal part of everyday life. Andrini advised a woman who said that gang violence did not impact her life in a big way, so she asked her how she knew the gangs were violent.

“She responded that a few times a week she would find a dead body outside her front door when her children left for school,” Andrini said.

These types of experiences were eye-opening for the students as they learned more about the women and their stories, and saw the conditions of the detention center where they were living.

“The conditions were dire, yet the women and children had smiles on their faces and were very positive in spite of what they had experienced. Many were young and had already lived through so much pain and suffering. The experience helped me appreciate how much I have been privileged with and has encouraged me to seek more ways to give back,” Rengifo said.

As a mother herself, Andrini was especially moved by the women who were fleeing to protect their children.

“To see what these women had to suffer through, and watch their children suffer through, was unbelievable. Many endured years of indescribable violence and only fled once the perpetrator began to inflict the violence upon their children,” Andrini said. “It’s an important reminder, that as a privileged American, I won the ‘birth lottery.’ These women are incredible, strong, and resilient individuals who were born into extremely difficult circumstances, yet continue to remain positive and hopeful.”

While serving at the detention center, Ibanez represented an asylum seeker in immigration court, under the supervision of Professor Monterrosa, in a voluntary departure case.

“I had a foundation from my immigration law courses prior to volunteering at the detention center,” Ibanez said. “To prepare for my hearing, I used the knowledge I already had to do research on various issues the immigration judge may have asked during the hearing.”

All of the students shared this observation. They said that it was useful to apply what they had learned in their classes and credited Monterrosa for his guidance and support.

“Professor Monterrosa prepared us academically, but he also illustrated a deep passion for his work that was incredible to watch and learn from,” Andrini said. “This was an incredible and humbling experience. I feel very blessed to attend Notre Dame where I’m surrounded by people who want to sacrifice their time for others.”

Monterrosa was inspired to serve with the Dilley project after going on an immersion trip through Notre Dame’s Center for Social Concerns a few years ago. He plans to take another group of students back to Texas at the end of the spring semester.

“This is a great experience for the students to put into practice what we learn in class, to see how the actual process works, and see the humanitarian issue first hand,” Monterrosa said.

Originally published by Denise Wager at law.nd.edu on February 01, 2019.