The second annual Gold Mass at the Basilica of the Sacred Heart and the Charles Edison Lecture Series-sponsored lecture that followed in Jordan Hall of Science at the University of Notre Dame was held on a Nov. 15, 2018, the feast day of Saint Albert the Great, the patron saint of scientists. The events, a campus-wide collaboration among several colleges, centers and institutes, drew more than 250 participants from the on- and off-campus communities.

“Through the Gold Mass and lecture, we are able to fully highlight the intersection of faith, science and engineering,” said Mary Galvin, the William K. Warren Foundation Dean of the College of Science. “The event allows us to demonstrate this harmonious relationship and share it not only with students and faculty at Notre Dame, but also with the broader South Bend community.” 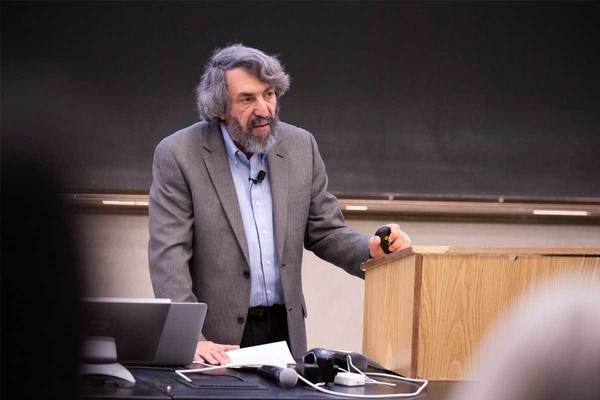 As he began his talk, Meredith promised he would not provide definitive answers to the question, “If God exists and is both perfectly powerful and all powerful, whence comes evil,” and he did not.

What he did do instead was explore the topic of evil — including its perceived relationship with disease, pain, suffering, and death — using the fictional works of Fyodor Dostoevsky and Thomas Mann to help illustrate the human condition. He also invoked Thomas Aquinas, Boethius and C.S. Lewis’ The Problem of Pain as he spoke.

While he did not provide “answers,” Meredith did offer several thoughts for consideration. His primary observation was that “disease is not evil [which is the privation of good]. Rather it has the quality of being evil.” He also submitted that the reason disease exists is that it is a natural outcome of the biological world.

As a physician, he shared that it is the job of medical professionals to alleviate suffering and cure disease, if possible, but not to “cure” mortality. He also commented that biology, as a science, is in its infancy, and that amazing discoveries are on the horizon. This led to a brief discussion of disabilities, ethics, and opened the door for audience questions, discourse and reflection. 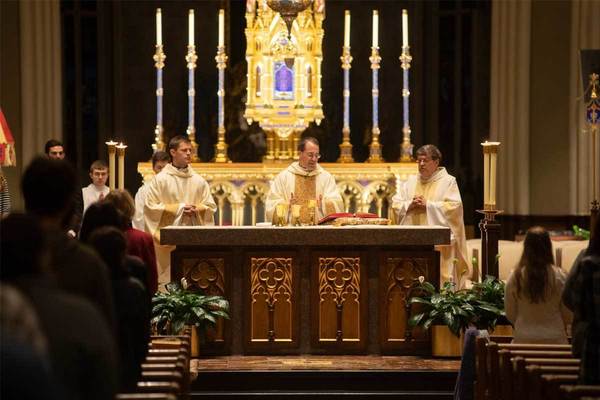 Initiated in 2016 by the Society of Catholic Scientists, the Gold Mass — named because of the hood color worn by those graduating with doctoral degrees in science — is a new tradition to uplift those in engineering and science (much like the Blue Mass, for police officers, or the Red Mass, for those in the legal profession). The first Gold Mass was held at the Massachusetts Institute of Technology on Nov. 15, 2016. Rev. Terrence Ehrman, C.S.C., assistant director for Life Sciences Research and Outreach for the Center for Theology, Science and Human Flourishing, was eager to bring this Mass, accompanied by a lecture, to Notre Dame. Last year was the inaugural event at the University.

“Although it occurred on a snowy day, the second annual Gold Mass continues to point to Jesus Christ as the Wisdom of God,” said Father Ehrman, who celebrated the Mass. “The same God who creates the snow through his divine Word, is the same God who redeems all things in Jesus Christ, the Incarnate Word. Stephen Meredith’s lecture on disease and the problem of evil emphasized that evil only exists in the context of good. For those suffering from disease and those compassionately caring for them, the yoke/Cross of Christ, who is ‘gentle and lowly in heart,’ offers the ultimate context of good in which they can find ‘rest for their souls.’"

Originally published by Nina Welding at science.nd.edu on December 12, 2018.