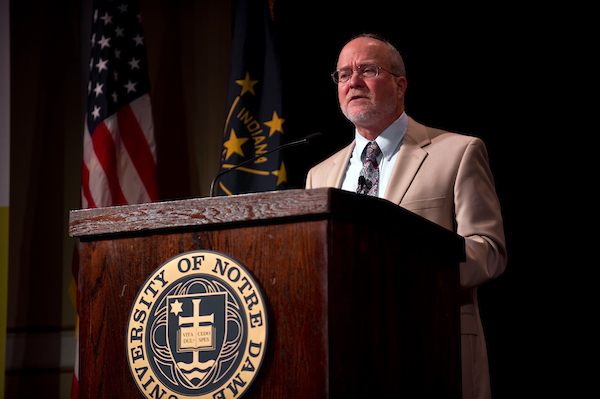 The U.S. Department of State Tuesday nominated Notre Dame Law Professor Doug Cassel as the U.S. candidate to serve on the Inter-American Commission on Human Rights, the hemispheric monitoring body of the Organization of American States.

In a diplomatic note sent to 34 OAS member nations, the State Department called Cassel a “highly accomplished and respected scholar in the field of human rights and international law.”

“He has broad knowledge of the hemisphere, with deep sensitivity to its political and social challenges, and has extensive knowledge of the Inter-American human rights system and the operation of both national and international adjudicatory processes,” the note added.

The election for the four open seats on the seven-member commission will take place at the OAS annual meeting in Mexico City in June. The voting is expected to be hotly contested. If elected, Cassel would serve a four-year term beginning in January 2018.

Located in Washington, D.C., the commission reports on hemispheric human rights issues, hears individual complaints of violations brought against OAS member countries, issues emergency protective orders, and refers cases from Latin America to the Inter-American Court of Human Rights. (The U.S. is a party to the commission, but not to the court.)

“The commission is a vital safeguard for the defense of human rights in the Americas,” Cassel said. “I am honored to be nominated for this position of trust.”

Commissioners serve in their individual capacities, not as representatives of their governments.

The commission post is part-time and mostly unpaid, except for expenses. Like Mendez and Carozza, Cassel would retain a full teaching load, while offering Notre Dame law students learning opportunities to assist in the work of the commission.

Originally published by Doug Cassel at law.nd.edu on March 10, 2017.