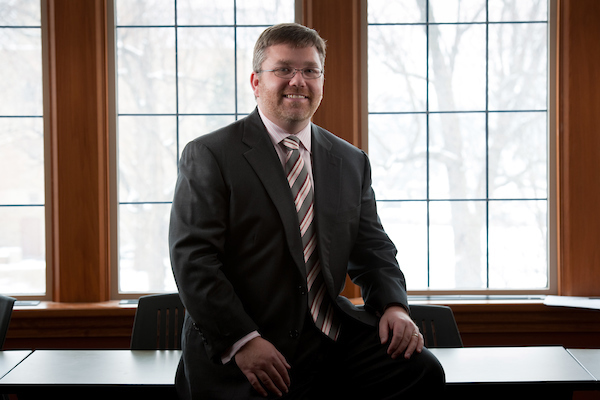 Technology, especially in the digital age, can often be one step ahead of the law.

McKenna, associate dean for faculty research and development, professor of law and Notre Dame presidential fellow at Notre Dame Law School, is an expert in the area of intellectual property. The subject has attracted his interest since he was in law school during the dot-com era of the late 1990s.

“What was particularly interesting to me was that, given the state of technology, it was a very dynamic field,” McKenna said. “The pace of change is fast, and it’s hard for courts and legislatures to keep up with it.”

McKenna and Lucas S. Osborn, an associate professor of law at Campbell Law School, recently co-authored a paper on trademarks and digital goods.

McKenna and Osborn interpreted the U.S. Supreme Court’s 2003 case Dastar Corp. v. Twentieth Century Fox Film Corp. and applied that case to a world in which products are less often purchased in physical form and more often beamed as digital files to computers and phones. What’s more, they note, is that the rise of 3-D printing presents the possibility that nearly any product could be distributed in a digital file.

“In that world,” McKenna said, “it’s not clear at all that you need a company to produce the physical things.”

Trademark law, however, is deeply oriented toward physical goods and might not fit well in a world of increasing digitization.

“Indeed,” McKenna and Olson write, “if we are seeing a move to a world occupied by more digital goods, that might be a world that pushes away from trademark law and toward copyright, utility patent, or design patent.”

“Our students come in now with so much more technological sophistication,” McKenna said. “Intellectual property is a hot field, a dynamic field, and a field that engages students in things they’re already interested in — whether that’s music, movies, software, or video games.”

Originally published by Kevin Allen at law.nd.edu on March 01, 2017.